A recent surge of interest has seen the assets of gold stablecoins pass $1bn in value. But business and disclosure standards in the sector are uneven and patchy.

A stablecoin is a digital token that operates on cryptocurrency networks, but whose value is backed by holdings of another asset, such as the dollar or gold. 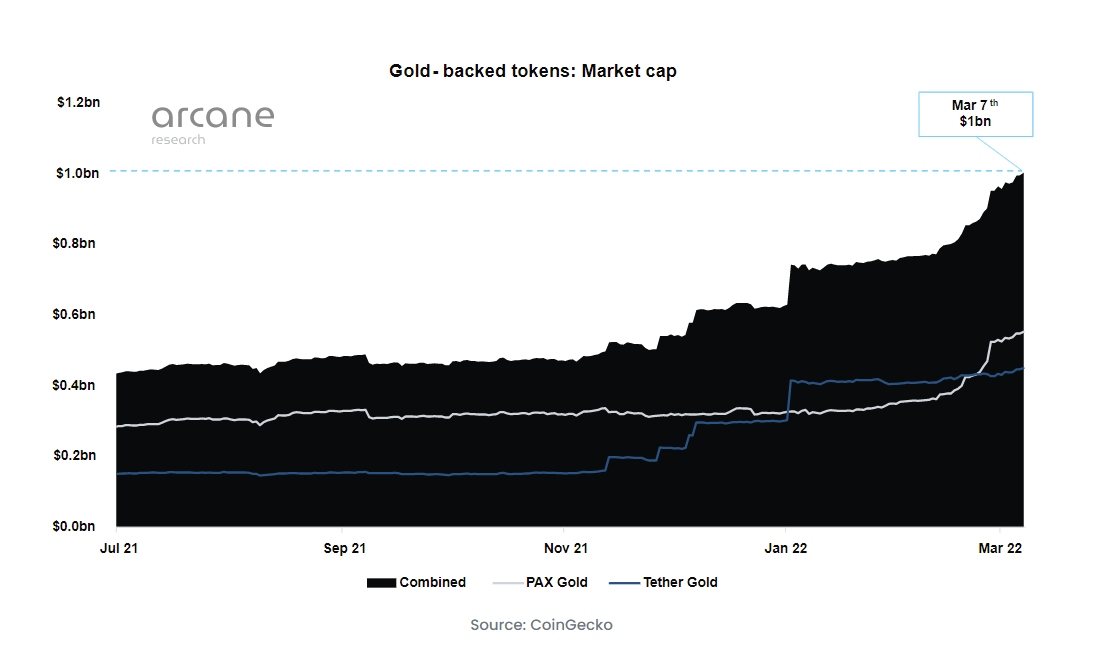 Part of the recent rise in assets is down to the jump in the gold price since the beginning of the Russia-Ukraine conflict.

However, inflows to gold stablecoins have also been strong: CoinMetrics reported this week that Paxos Gold has seen the strongest growth in issuance of all stablecoins this year.

This is despite the fact that the assets in dollar-linked stablecoins—around $180bn—are many multiples higher.

A bright future for gold stablecoins

Gold stablecoins are a relatively new product. One of their main competitors is gold ETFs, the most popular investment vehicle for those wanting bullion exposure in their pensions plans or stock accounts.

According to the World Gold Council, gold ETFs held $115bn in bullion at the end of 2021.

However, some prominent figures in the cryptocurrency business are predicting a bright future for gold stablecoins.

According to Italian investigative journalist Nicola Borzi, Tether’s chief executive Giancarlo Devasini is one of the main optimists.

Devasini told guests at a party in Milan in November, Borzi reported, shortly before the assets in Tether’s gold-pegged stablecoin started to rise sharply, that “the next big thing for stablecoins will be moving to [tokens] pegged to gold”.

Tether’s dollar stablecoin (USDT) is the largest in the world, with around $80bn in assets, although it has been plagued by allegations of past misconduct.

Tether, said the Attorney General, had “deceived clients and the market by overstating [its] reserves, hiding approximately $850m in losses around the globe”.

In October the Commodity Futures Trading Commission (CFTC) ordered Tether and Bitfinex to pay a fine of $41m over what it said were misleading claims that the tether stablecoin had been fully backed by US dollars.

By comparison with gold ETFs, which follow the relevant fund or investment product regulations in the jurisdictions where they are issued, gold stablecoins are not regulated (though some of the entities involved in issuing them may be).

Gold stablecoins’ chief selling point is a promise to eliminate (more or less) the settlement risk inherent in other savings products.

For example, DGLD, a gold stablecoin backed by Coinshares, says it dramatically reduces the settlement period, and the associated settlement risks, for transactions in gold.

But DGLD says its settlement of a client’s transactions in the gold token is near-instantaneous. This can be achieved, the firm says, by linking client transactions in DGLD to the bitcoin network. Bitcoin’s open-source database provides proof that transactions happened in a certain order.

Concerns over potential settlement risks in gold soared at the beginning of the coronavirus pandemic, when the price for gold traded in New York diverged dramatically from the price in London.

The divergence was due principally to supply chain difficulties as a result of the shutdown of global air traffic.

For those already investing in cryptocurrencies, gold stablecoins also offer an easy way to park cash in the precious metal without leaving the digital asset ecosystem.

The diverse structures of gold stablecoins mean that anyone considering buying one needs to conduct extra due diligence.

For example, DGLD levies fees in a similar way to gold ETFs: by gradually reducing token holders’ entitlement to the underlying bullion.

At 1 percent a year, this so-called “demurrage fee” is greater than the fees on gold ETFs (which range from 12 to 40 basis points a year).

XAUT, by contrast, says it doesn’t charge a fee for the custody of token holders’ gold. Instead, it says, it levies a one-time 25 basis point fee on each creation of the gold token. Redemptions carry additional fees.

PAXG says it charges creation and redemption fees of between 3 and 100 basis points, based on the order size, plus a 2 basis point fee for transactions on the ethereum blockchain, where it records token issuance.

XAUT and PAXG token holders also have to pay the ethereum network’s own fees (called “gas”) when transacting on it.

The minimum token creation size varies substantially between the two most popular gold stablecoins: PAXG allows a minimum purchase equivalent to a hundredth of a troy ounce of gold (around $20), but XAUT only allows creations of 50 troy ounces in gold (around $97k) or more.

And custodial arrangements vary, as well as the availability of information as to where the gold is held.

PAXG says each of its tokens is backed by one troy ounce of a 400-ounce London Good Delivery gold bar, stored in the vaults of Brink’s and the Commercial Bank of China Limited (ICBC) Standard Bank, both of which are approved by the London Bullion Market Association (LBMA).

PAXG also publishes monthly attestations, issued by a third-party auditor, to verify that the supply of tokens corresponds one-to-one with the ounces of London Good Delivery gold held in vaults.

DGLD says it stores the gold backing its tokens in a Swiss vault at the PAMP facility.

However, Tether does not disclose details of the custody of the gold held to back its stablecoins.

In response to a query from New Money Review regarding XAUT, the stablecoin issuer said:

“For security reasons and to honour confidentiality commitments, Tether Gold does not disclose specific information about the locations or companies involved in securing the gold held for XAUT token holders.”

“Tether Gold purchases, or arranges for the purchase of gold bars meeting the London Good Delivery standard, from a gold dealer in Switzerland where the gold is securely stored by a custodian.”

Tether declined to comment on the relationship between Tether Operations Limited, a BVI-incorporated company, and TG Commodities Limited.

According to the CFTC, Tether Operations Limited was incorporated in the British Virgin Islands (BVI) on March 15, 2017. The company, which is not regulated with any financial authority, operates Tether’s website and token platform.

A search on the UK Companies House website showed that the person with significant control of TG Commodities Limited is Mr. Sanjeev Gupta, who owns more than 75 percent of both the shares and voting rights of the company.

Gupta is also the owner and chief executive of the Gupta Family Group (GFG) Alliance, the controversial steel and mining conglomerate.

The Companies House website shows that the latest company accounts for TG Commodities Limited (as of 30 November 2020) were due by 31 August 2021 and have not yet been filed.

Greensill collapsed into insolvency in March 2021, incurring billions of dollars in losses for its lenders and the investors who had backed its financial products.

In June 2021 it was revealed that the UK government-owned British Business Bank had lent Greensill £350m, apparently in breach of its own lending limits.

The bank’s due diligence checks were later described by the UK parliament’s Public Accounts Committee as “woefully inadequate”.

In 2018, former British Prime Minister David Cameron became an advisor to Greensill, a position for which he reportedly earned in excess of $40,000 per day. He was also given stock options that could have been worth $70m if Greensill’s planned initial public offering had taken place.

According to a report published last summer by an independent inquiry, Cameron lobbied members of the British government and civil servants on behalf of Greensill, but under the rules in place at the time, was not required to register as a lobbyist.

Gold in the time of war

Gold or bitcoin–which store of value?

Gold and bitcoin primed for a rebound?