How much bitcoin trading takes place in ‘real money’? Not much. Most is hermetically sealed within the crypto ecosystem.

According to Kaiko, 70 percent of bitcoin trading activity during the last three months was denominated in tether, with other stablecoins (primarily the dollar-denominated BUSD, FTXUSD and USDC) representing an additional 13 percent of overall bitcoin volumes.

BUSD is the native dollar stablecoin of cryptocurrency exchange Binance, FTXUSD is the stablecoin of exchange FTX and USDC is issued by a consortium including crypto exchange Coinbase and payments firm Circle.

In recent weeks, according to Coinmarketcap, bitcoin has traded around $30-40bn a day in total. Although the digital token’s price has recovered sharply from a low reached in July, trading volumes are still subdued compared to the first half of the year, when they regularly approached $100bn a day. 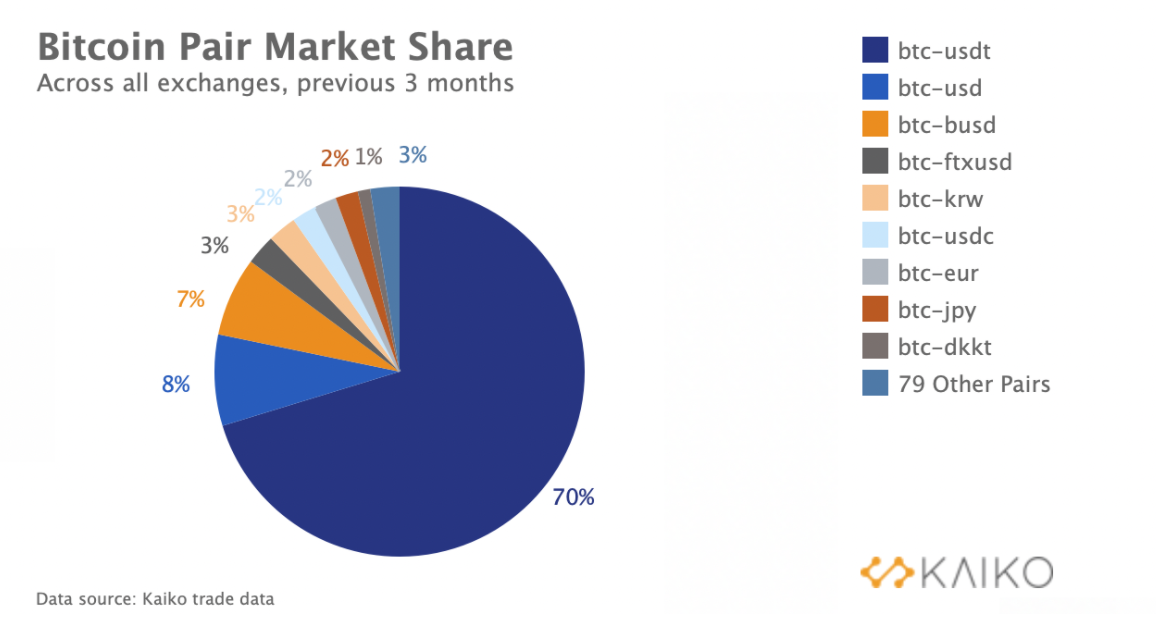 Tether, which promises that its stablecoin tokens will trade at a $1 market value, has long been a focus of controversy.

The stablecoin issuer was sued in 2019 by the New York Attorney General, who alleged that Tether and its affiliate, cryptocurrency exchange Bitfinex, had colluded to cover up a loss of up to $850m of client funds.

Tether has long been a focus of controversy

While Tether settled the case earlier this year, questions about the stablecoin’s reserve backing have continued to circulate, even as Tether has continued to grow.

The stablecoin has shot up in size since March last year, increasing its assets from $3bn to over $69bn.

In its latest attestation, published on June 30 (when its assets were $63bn), Tether said its reserves consisted of $31bn in commercial paper and certificates of deposit, $6bn in cash and bank deposits, $1bn in reverse repo notes, $15bn in treasury bills, $2.5bn in secured loans, $5bn in corporate bonds and $2bn in other investments.

Tether has so far refused to publish a full breakdown of its reserve assets.

However, last week Bloomberg reported that part of Tether’s reserves consists of billions of dollars of short-term loans to large Chinese companies.

While Tether has denied holding any debt of Evergrande, the embattled Chinese property developer whose debt price has collapsed in recent weeks, Stuart Hoegner, Tether’s lawyer, declined to answer a question from Bloomberg on whether Tether holds other Chinese commercial paper.

Bloomberg also said that Tether had made loans worth billions of dollars to other cryptocurrency companies, receiving bitcoin as collateral.

For example, the CEO of Celsius Network, a cryptocurrency lending platform, told Bloomberg his firm pays Tether interest rates of 5 to 6 percent a year on loans of about 1 billion tethers.

Lending platforms like Celsius are able to pay such interest rates because tethers can be lent out at even higher interest rates to other cryptocurrency market intermediaries.

For example, Bitcompare, a site comparing the rates on cryptocurrency loans and savings accounts, currently advertises yields of up to 13 percent on deposits of tether tokens.

“[This] is far more than what traditional financial institutions like banks offer on fiat currencies like USD,” Bitcompare says on its site.

For its part, Celsius makes it clear that anyone lending it bitcoin or other cryptocurrency is giving up ownership in return for a promise of yield.

“All digital assets transferred to Celsius are owned and held by Celsius for its own account,” the firm says in its terms and conditions.

Other operators of stablecoins have moved this year to limit their exposure to credit risks.

In August, Circle and Coinbase, which are part of a consortium issuing the $32bn stablecoin USDC, said they were shifting all the stablecoin’s reserves into cash and short-term US government bonds, foregoing riskier investments.

A month earlier, Circle had said that USDC’s reserves, like those of Tether, had included corporate bonds and commercial paper.

Last week Circle disclosed that it was under investigation by the US securities market regulator, without saying why.

Global regulators close in on tether