Investors seeking refuge from the equity market meltdown in gold and bitcoin have so far faced losses. But this is a buying opportunity in both assets, say market observers.

Amidst the coronavirus-induced panic, the dollar price of gold fell by 12 percent, from $1687 to $1486, within the space of seven trading days, starting March 6.

Bitcoin’s price fared dramatically worse, dropping 42 percent over the same period, from $9122 to $5175 a coin.

The stocks of both gold and bitcoin are limited—gold supply increases at around 1 percent a year, while bitcoin’s annual inflation rate will fall to under 2 percent after May’s halving of the block reward.

In theory, both assets should therefore offer some protection from feverish central bank money printing.

In the space of a few weeks, the US central bank has cut interest rates from 1.5 percent to zero, committed to a new $700bn asset purchase programme and offered over $2trn in new loans to the seized-up wholesale money markets.

“Occasionally you have to raid the piggy bank”

So why aren’t the two safe haven assets—the yellow metal and its new digital competitor—performing better?

According to gold expert Ross Norman, the recent gold sell-off reflects a desperate search for cash amidst collapsing prices for other assets.

“Gold is highly liquid and if you need cash quickly it’s a ready source of funds. Gold was also up a lot last year and people prefer to book a gain rather than a loss. Occasionally you have to raid the piggy bank,” Norman told New Money Review.

“These are unprecedented conditions. People are just selling everything. It may just be a matter of time before markets are suspended,” he added.

On March 17, US Treasury secretary Steven Mnuchin said the country’s markets could start to operate with reduced trading hours.

According to Charles Morris, a fund manager, long-time gold observer and founder of cryptocurrency research firm ByteTree, current market conditions are reminiscent of 2008.

“People are throwing in the towel,” he told New Money Review.

“Bonds are now selling off too and inflation is falling. This happened in 2008, but gold then doubled in price afterwards.”

Earlier this year Morris was a lone bear, citing rising miner inventory as a reason for caution on the bitcoin’s price prospects.

“A cryptocurrency with low demand would have a thin market to sell into,” he said.

“As a result, [bitcoin miners’] inventory would keep rising. In crypto, value creation comes from building a vibrant and widely distributed network. If the majority of the coins are held by the miners, then there is no value creation as there is no network.” 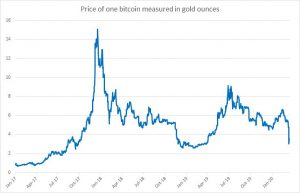 However, Morris believes that the recent downdraft in bitcoin prices offers an entry point for investors.

On March 17, he went into further detail in a post on the ByteTree site.

“With a price that is below our estimated fair value and network demand strengthening, the case for buying bitcoin does not get much stronger than this. That said, volatility is high and external factors can’t be ignored. COVID-19 is brutal and things are changing rapidly,” he said.

“Yet we believe bitcoin will come out of this stronger,” he added.

“After all, the network is roughly three times stronger than it was at the end of the last bear market in early 2019.”

“Both gold and bitcoin have been trashed in recent weeks,” he told New Money Review.

“But as we come out of this crisis, I think the environment is really positive for both. These are the only two financial instruments that really have limited supply,” he said.