But this was only the start. By mid-December, the price of bitcoin had rocketed to over 15 ounces of gold (or $19,000 in US dollar terms). With the recent cooling in cryptocurrency sentiment, one bitcoin is now worth around seven gold ounces. 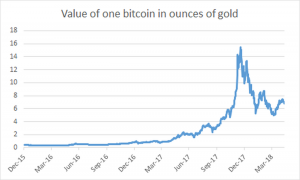 A focus on recent price increases risks overstating bitcoin’s significance. The total market value of gold ($7.6trn for all above-ground stocks) is still around fifty times that of bitcoin ($145bn for all the bitcoins ever mined).

But bitcoin’s rise has caught the attention of many gold investors, who are taking a close look at the prospects for the digital currency as a competing hard asset.

“The wide adoption of bitcoin will reduce government’s ability to finance its operation through inflation.”

Some bitcoin enthusiasts see it as a long-term replacement for the precious metal.

Saifedean Ammous, professor of economics at the Lebanese American University and author of a new book called “The Bitcoin Standard”, predicts a return to a fixed currency regime, but with bitcoin rather than gold at its core.

Under the classical gold standard, which lasted for most of the nineteenth century and into the early part of the twentieth century, domestic currencies were freely convertible into gold at a fixed price. The standard was abandoned by governments under the pressure of rising fiscal deficits caused by the First World War.

Although reinstated by some former members after the war, most countries departed the gold standard for good in the 1930s. A weakened version of the system limped on until 1971, when the US government abandoned a notional link between the dollar and gold.

Earlier, gold functioned as humans’ preferred store of value over long periods. The gold solidus coin of Byzantium, for example, served as the main trading currency of Eurasia for around seven centuries.

The solidus was so popular that it spread far beyond the region under Byzantine rule. It was copied by the Umayyad caliphate, Damascus-based rulers of the Middle East, North Africa and Spain, and it has been found in coin hoards as far afield as northern China.

Bitcoin enthusiasts believe the cryptocurrency can assume a similar role in future. Ammous predicts that popular discontent with governments’ abuse of their monetary powers will bring an end to the current system of unpegged fiat currencies issued and controlled by central banks.

“The wide adoption of bitcoin will reduce government’s ability to finance its operation through inflation. It was government money in the twentieth century that allowed for the birth of the heavily interventionist managerial state, with totalitarian and authoritarian tendencies,” writes Ammous.

As a form of money, bitcoin has certain desirable characteristics that are shared with gold, with limited supply top of the list. The total stock of bitcoins expands at a diminishing rate and will peak at 21mn coins sometime next century. Although the supply of gold is more variable, currently only around 1.7% a year is added to the existing stock through mining. 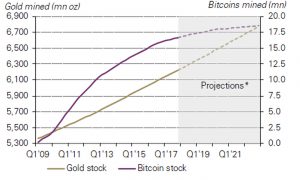 By comparison with most other investment assets, gold and bitcoin have the advantage of being free of counterparty risk: their perceived value is inherent, rather than relying on any other institution, such as a government, central bank or bank, for payment or performance.

When it comes to other attributes of desirable money, bitcoin and gold have competing merits. Bitcoin seems to offer better divisibility than gold: each bitcoin can be divided into a hundred million satoshis, whereas the costs of trading gold as an investment rise sharply in relative terms for transactions of smaller size.

However, units of the yellow metal may be more fungible (interchangeable) than bitcoin. Gold is gold anywhere in the world, but the transparency of the bitcoin blockchain could allow exchanges and merchants to discriminate against certain coins on the basis of their past owners or transaction history.

“Bitcoin is the hardest money ever invented.”

Ammous argues that bitcoin’s two main advantages over gold are its security and transferability.

“Bitcoin, and cryptography in general, are defensive technologies that make the cost of defending property and information far lower than the cost of attacking them,” says Ammous.

“Bitcoin is the hardest money ever invented,” he argues. “Growth in its value cannot possibly increase its supply; it can only make the network more secure and immune to attack.”

“The historical version of sound money, gold, did not have these advantages,” he argues.

“Gold’s physicality made it vulnerable to government control. That gold could not be moved around easily meant that payments using it had to be centralised in banks and central banks, making confiscation easy.”

Notoriously, in 1933 President Roosevelt banned the private ownership of gold and silver in the US and forced bullion owners to convert their holdings into dollars at an unfavourable, below-market rate.

“It’s naïve to assume that the community of developers involved in bitcoin are always going to be doing this for free.”

Others take issue with the assertion that a monetary asset based on computer code can ever offer the durability and security of gold.

“Who guarantees that the software developers are always going to do the right thing?” asks Chris Blasi, president of Neptune Global Holdings, a precious metals exchange.

“In cryptocurrencies, you are still relying on people and people are subject to corruption or human error. I think it’s naïve to assume that the community of developers involved in bitcoin are always going to be doing this for free or for the good of the world.”

Charles Morris, chief investment officer at Newscape Capital Management, says the sensitivity of bitcoin to the scale of its user network could work both for and against the cryptocurrency.

The World Gold Council, a trade organisation representing the gold industry, points out that the market liquidity of bitcoin still falls far short of that of gold.

“Bitcoin trades $2bn, on average, a day, which is roughly equivalent to the world daily trading volume of gold-backed ETFs. This volume, however, is less than 1% of the total gold market, which trades approximately $250bn a day,” the WGC wrote in a January research paper.

Despite the arguments over gold’s and cryptocurrencies’ relative merits, there are good arguments for both assets to form part of an investment portfolio, says Ross Norman, chief executive of precious metals dealer Sharps Pixley.

“I think gold and digital assets are hugely complementary, rather than in competition with each other,” Norman told New Money Review.

“Gold could serve as a diversifier and unit of account for investors in cryptocurrencies. But digital assets have a lot to teach gold in terms of the efficient transfer of value. And cryptocurrencies have unquestionably shown how to capture the headlines. It’s a good marriage.”