Half of the reserves of the unregulated digital dollar, tether, are in the unsecured debt of unknown corporate issuers, according to details of the stablecoin’s reserve backing at the end of March, published earlier today.

Tether, the issuer of tether tokens, had agreed as part of a February settlement with New York State prosecutors to disclose details of its stablecoin’s end-March reserves by May 18, and to do so quarterly for two years.

In the February settlement, the New York attorney general, Letitia James, said that Tether, together with a related entity, cryptocurrency exchange Bitfinex, had deceived investors in the past about the stablecoin’s backing.

“Tether’s claims that its virtual currency was fully backed by US dollars at all times was a lie,” James said.

“These companies obscured the true risk investors faced and were operated by unlicensed and unregulated individuals and entities dealing in the darkest corners of the financial system.”

Despite its past controversies, Tether has recently been on a tear: its assets have reached $58bn, up nearly 1500% since the start of the coronavirus pandemic.

Tether now turns over $200-250bn a day, making it by far the most traded cryptocurrency token. By comparison, bitcoin’s average daily trading volume is $50-70bn. 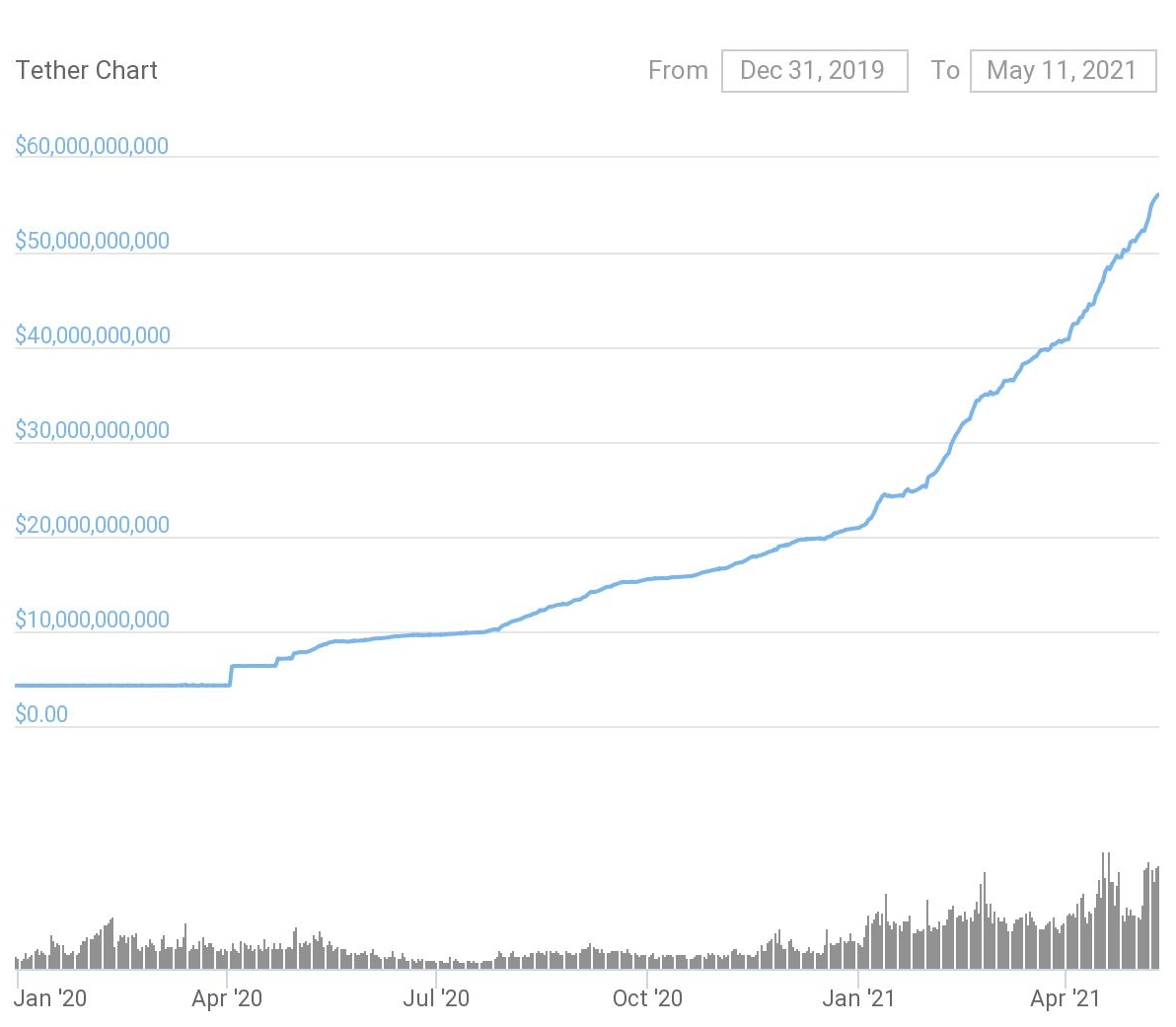 As disclosed today by Tether, less than 3 percent of its stablecoin’s reserves at the end of March were in cash. By contrast, until February 2019, Tether had said that its stablecoins were backed one-for-one by dollars held in traditional bank accounts.

18.4 percent of the Tether end-March reserves were in ‘fiduciary deposits’ (deposits placed on Tether’s behalf by an agent bank with a third party bank), the stablecoin issuer said.

49.6 percent of the reserves were in commercial paper and 5 percent were in reverse repo trades and US treasury bills, Tether said.

According to Tether, the remaining 25 percent of the reserves were split between secured loans (12.6 percent), corporate bonds, funds and precious metals (10 percent), and other investments, including digital tokens (1.6 percent).

According to the Block, citing Hoegner, the digital token portion of the reserves is bitcoin. Tether’s assets totalled $42.4bn at end-March. 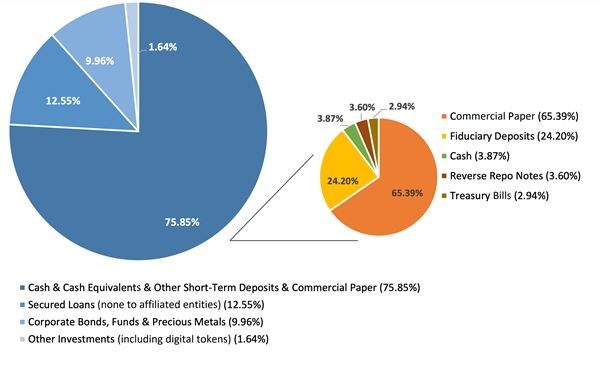 Levels of disclosure at other stablecoins and money market funds

Other dollar stablecoin issuers provide varying levels of clarity of the make-up of their digital currencies’ reserves.

Gemini, for example, says its Gemini Dollar, which had $124m in assets at the end of March, is backed by dollars held in segregated, omnibus bank accounts at institutions insured by the Federal Deposit Insurance Corporation (FDIC), as well as by dollar money market funds holding only US government debt.

Circle, which manages the $16bn USDC stablecoin, says its reserves are managed in line ‘permissible investment rules under US state banking supervision and regulation of money transmission companies’, but offers no further information.

Circle did not respond to an email seeking further information on the precise rules it follows.

Regulated dollar money market funds, which closely resemble stablecoins in their objectives, operate according to more detailed and stringent reserve and disclosure obligations.

Under new rules imposed by the Securities and Exchange Commission (SEC) in 2014, US dollar money market funds are required to disclose daily (via their websites) levels of daily and weekly liquid assets, net shareholder inflows and outflows, market-based net asset values, sponsor support, and any imposition of fees and gates limiting redemptions from the funds.

As defined by regulations, ‘weekly liquid assets’ include cash, direct obligations of the US government, certain securities issued by US government instrumentalities with a remaining maturity date of 60 days or less, and securities that mature or are subject to a demand feature exercisable and payable within five business days.