The operators of the collapsed Terra stablecoin ($UST) last week allowed selected holders of the dollar token to cash out at close to 100 cents in the dollar, using cryptocurrency exchanges Gemini and Binance as a conduit.

The Luna Foundation Guard revealed this information in a series of tweets released this morning.

It did not disclose the timing of the transactions. However, evidence from Elliptic, a cryptocurrency research firm, suggested that the transactions took place on May 9 and early on May 10, when the $UST price traded in secondary markets as low as 60 cents in the dollar.

$UST is now trading at 9 cents in the dollar, while the $LUNA token is effectively worthless.

This implies that the holders of $UST who were able to sell their tokens for the bitcoin offered by the Luna Foundation Guard were able to exit their positions at close to face value ($1), rather than the deep discounts on offer in the secondary market.

On Friday, Elliptic published a blog in which it said that during last week’s failed bailout attempt of the Terra/Luna complex, Luna Foundation Guard moved its bitcoins to two cryptocurrency exchanges, Gemini and Binance. 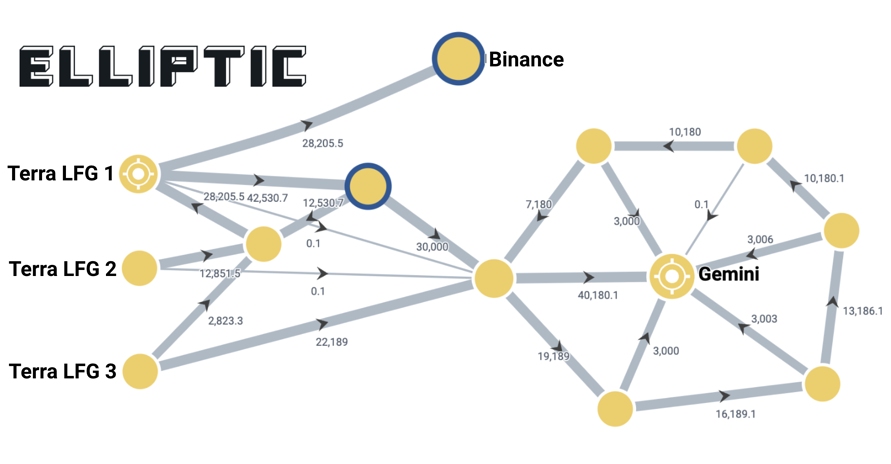 “On the morning of May 9th, the LFG announced that it would ‘loan $750m worth of BTC to OTC trading firms to help protect the UST peg’,” Elliptic said.

“Terra creator Do Kwon later clarified that the bitcoin would be ‘used to trade’,” it went on.

“Within hours the entirety of this 52,189 BTC was subsequently moved to a single account at Gemini – the US-based crypto currency exchange – across several bitcoin transactions,” Elliptic said.

“It is not possible to trace the assets further or identify whether they were sold to support the UST price.”

“At 1:00am UTC on May 10th, this was moved in its entirety, in a single transaction, to an account at the cryptoasset exchange Binance,” Elliptic said.

“Again, it is not possible to identify whether these assets were sold or subsequently moved to other wallets.”

Changpeng Zhao, chief executive of Binance, has been active on Twitter over the weekend in an attempt to defend his exchange’s role in the Terra collapse, but has not addressed the topic of the bitcoin movements from the Luna Foundation Guard.

Tyler and Cameron Winklevoss, the co-founders of Gemini, have not spoken of the Terra collapse on Twitter.

The two exchanges are now likely to come under increasing pressure to disclose which cryptocurrency market participants were able to exit their Terra stablecoin positions last Monday and Tuesday at close to par value, while retail holders of Terra and Luna have lost nearly all their money.