Terra’s $1 per token market value was supposed to be kept in place by an algorithm. But the stablecoin’s sudden failure has led to a bailout attempt involving the world’s largest cryptocurrency exchange.

How Terra is supposed to work

According to the Terra (UST) stablecoin’s design, if its price fell below $1, automated trading programmes would swap the token for a dollar’s worth of a freely floating cryptocurrency called Luna.

This would have the effect of shrinking the Terra supply and bringing its price back to $1.

If the price went above $1, the same would happen but in reverse: removing Luna tokens from circulation and boosting the supply of UST, bringing its price back down.

But last night this mechanism failed. And, confronted by a market panic that sent Terra to a 40 percent discount to its dollar peg, the stablecoin’s operators stepped in and moved billions of dollars in reserves in a desperate attempt to save it.

In the early hours of May 10, Terra traded as low as 61 cents in the dollar on Binance, the most popular exchange for trading the stablecoin. At 09.30 UST on May 10 Terra was trading at 88 cents, still well below its target of $1.

At 04.35 UTC this morning Binance said it had decided to suspend Terra and Luna withdrawals “due to a high volume of pending withdrawal transactions, caused by network slowness and congestion”.

At 09.50 the exchange said it had restarted withdrawals.

Shrinking liquidity and deposit base

According to market data provider Kaiko, trading volumes in Terra have dried up dramatically during the last 24 hours, reducing the options for those wishing to move sizeable positions in the cryptocurrency.

“Before the stablecoin de-pegged, more than 20 million UST sat on the bid side of the UST-USDT (Terra/Tether) order book on Binance (one of the highest volume UST pairs). Now, there is under 1 million,” Kaiko tweeted this morning.

“On every exchange we looked at, bid and ask depth has completely depleted for UST trading pairs,” Kaiko said. 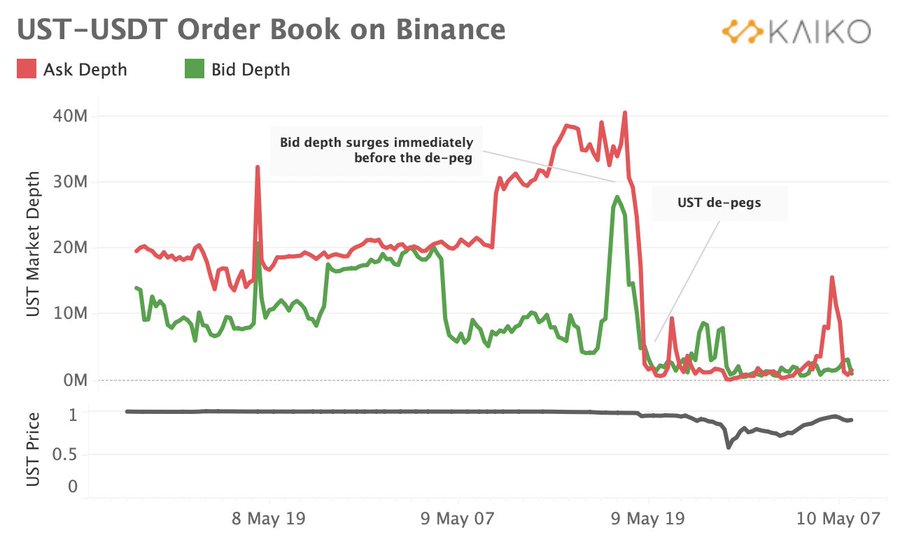 Although the primary stabilisation mechanism for Terra is an algorithm, in January this year the stablecoin’s operators set up the “Luna Foundation Guard” (LFG) in order help backstop its peg to the dollar.

Shortly after the LFG’s launch, its reserves rose to over $3bn, around 20 percent of the dollar market value of Terra.

In April Terra’s founder, Do Kwon, said the LFG aimed to accumulate $10bn in bitcoin as part of its reserves, making it the second largest holder of bitcoin after Satoshi Nakamoto.

This announcement sent the Luna token price to an all-time high of $119.50 in April, since when it has lost 75 percent of its value.

Yesterday, LFG’s bitcoin reserve balance was fully depleted after withdrawals of 42,530 bitcoin, worth around $1.3bn.

After the bitcoin withdrawal, the LFG was left with around $185m in reserves in the form of three cryptocurrency tokens: Avalanche, Luna and Terra.

The LFG Council, which governs the reserves, said in a series of tweets that it had decided to lend $750M worth of bitcoin to OTC trading firms “to help protect the UST peg”. It did not mention the transfer of bitcoin to Binance.

The LFG said it had loaned out another 750m in Terra (UST) to trading firms “to accumulate bitcoin as market conditions normalise”.

In January Jump Crypto bailed out a DeFi protocol called Wormhole after a £320m hack.

In 2011, Macedo Delgado was involved in an online poker cheating scandal that resulted in over $30k stolen from fellow players.

This article was updated after publication to include additional details of the Luna Foundation Guard’s governing council membership.