Central banks are braced for a world in which digital dollar tokens called stablecoins explode in value, posing a threat to governments’ ability to monitor the financial system.

That’s one of the key messages from a new Bank for International Settlements (BIS) working paper, published earlier this week. A working paper does not necessarily reflect the official view of the BIS.

In the paper, entitled ‘Stablecoins: risks, potential and regulation,” authors Douglas Arner, Raphael Auer and Jon Frost say the monetary authorities are preparing for stablecoins to become a much more significant part of the financial system.

Arner is professor of law at the University of Hong Kong, while Auer and Frost are economists at the BIS.

In future, stablecoin volumes may be “orders of magnitudes higher” than at present, they say.

Currently, global stablecoin supply is just under $25bn, with most of this total in Tether, an unregulated token issued by an affiliate of cryptocurrency exchange Bitfinex. 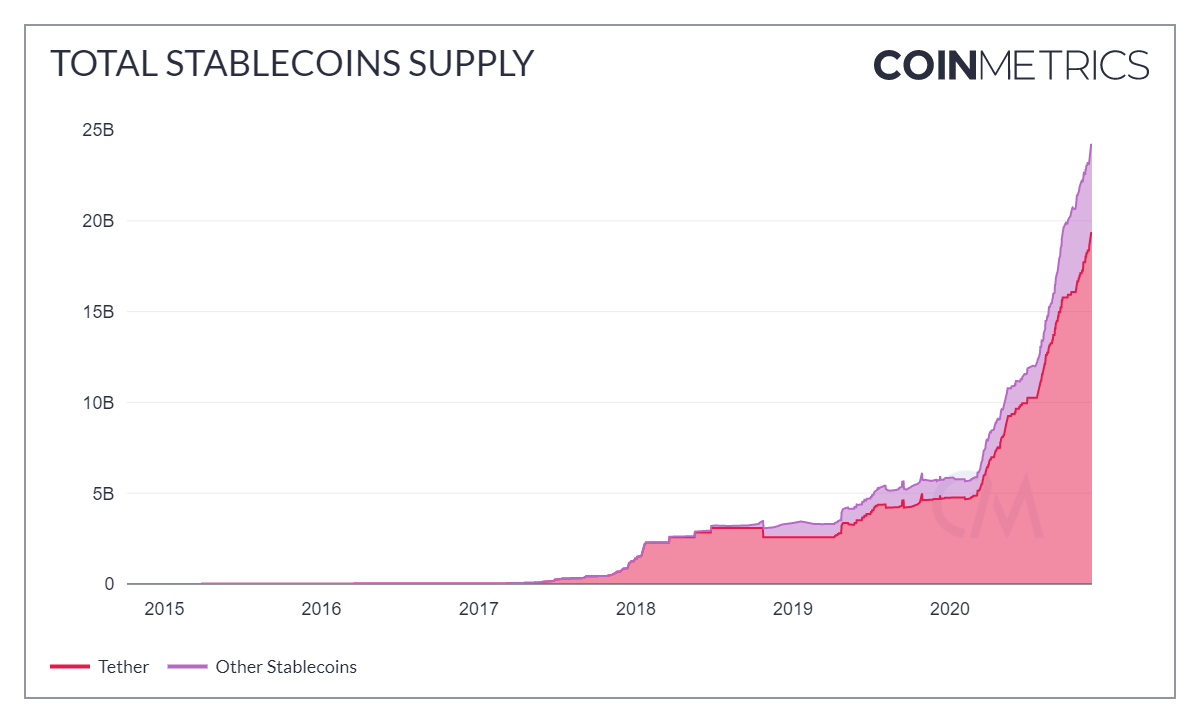 The supply of stablecoins has increased around five-fold this year, a jump many say has been triggered by the coronavirus.

stablecoin volumes may be “orders of magnitudes higher” than at present

According to Arner, Auer and Frost, stablecoins draw on earlier experiments with asset-backed money, some of which date back centuries.

However, they add, distributed ledger technology (DLT) has accelerated change in this area. DLT is the key design feature of cryptocurrency bitcoin, which was invented in 2009.

“Stablecoin proposals like Libra claim that they will make possible new forms of online exchange through their 24/7 availability, borderless nature, fractionalisation and integration with non-financial services,” say Arner, Auer and Frost.

This type of network could easily supersede existing payment mechanisms, they say.

Today, the Financial Times reported that Facebook will launch its first version of Libra as soon as January, in the form of a single currency (US dollar-backed) stablecoin.

One way for monetary authorities to stay on top of the forthcoming stablecoin explosion, say Arner, Auer and Frost, is to embed supervision and regulation within the token design itself.

“Embedded supervision is a framework that provides for compliance to be automatically monitored by reading the ledger of a DLT-based market,” say the authors.

“It can be used to improve the quality of data available to the supervisor, while reducing the need for firms to actively collect, verify and report data to authorities,” they say.

The embedded supervision approach could then be extended to other forms of digital asset, such as shares, bonds and property represented by entries on distributed ledgers, say Arner, Auer and Frost.

However, for this approach to supervision to work, legal systems need to be brought up to date, say the authors.

“The connection between the claim on or ownership in the underlying asset and the record of the digital token must ultimately be established by the legal system and relevant contractual arrangements,” say Arner, Auer and Frost.

“This is true for stablecoins, but also for assets such as real estate or shares in a bricks-and-mortar business. Importantly, this means that just as in a traditional financial system, a decentralised financial system needs to be backed up by an effective legal and judicial system and supporting enforcing institutions for contractual arrangements.”