The technology behind the last decade’s cryptocurrency boom—blockchain—carries the seeds of its own destruction, say economists at the Bank for International Settlements (BIS).

In a new bulletin, BIS economists Frederic Boissay, Giulio Cornelli, Sebastian Doerr and Jon Frost say that the cryptocurrency market has a natural tendency towards fragmentation, depriving the underlying networks of the ability to compete with traditional payments systems.

“It is the inherent features of blockchains—first and foremost, the need to incentivise decentralised nodes to validate transactions—that drive the fragmentation of the crypto landscape,” say the authors.

According to Boissay, Cornelli, Doerr and Frost, the limited transaction capacity in the earliest cryptocurrencies—seven transactions per second in the case of bitcoin—reflected a need to reward validators for recording transactions.

This network congestion then encourages a search for alternative networks, say Boissay, Cornelli, Doerr and Frost, but those alternatives are often less safe.

“This [search] leads to a system of parallel blockchains that cannot harness network effects, raising concerns about the governance and safety of the entire system,” they say.

To prove their point, Boissay, Cornelli, Doerr and Frost cite the recent example of a move away from the ethereum network.

A spike in ethereum transaction fees in 2020 and 2021, resulting from the increased use of its network to process decentralised finance (DeFi) transactions, led to rapidly rising interest in other ‘Layer 1’ cryptocurrency networks, say the BIS economists. Layer 1 networks are the underlying settlement systems for cryptocurrencies.

By contrast with bitcoin’s and ethereum’s inherent limits, Solana, a network that has recently suffered from repeated outages, promised throughput of up to 65,000 transactions per second. 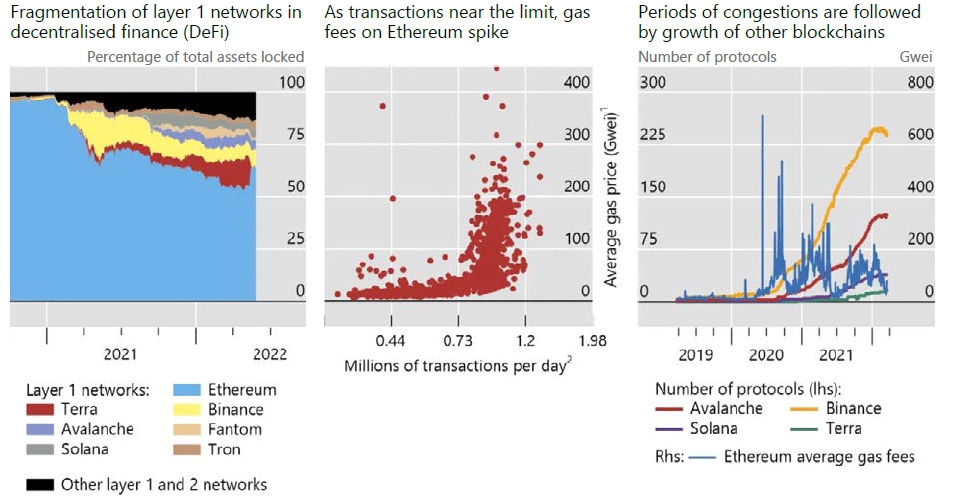 Move away from ethereum

By May 2022, say the BIS economists, around half the total assets in DeFi applications were locked into networks other than ethereum, compared to only a few percent at the end of 2020.

The fragmentation of the crypto landscape stands in stark contrast to traditional payment networks, says the BIS, which benefit from strong network effects.

In the traditional financial system, says the BIS, the more users flock to a particular platform, the more attractive it becomes for new users to join that platform, creating a virtuous circle.

The BIS economists cite the recent adoption of Brazil’s Pix instant payment system as an example of these network effects, with 114 million users signing up in the first year of the service, equivalent to 67 percent of Brazil’s adult population.

As different blockchains are not interoperable and feature different validation mechanisms, they cannot reach the same consensus about the validity of transactions on the other blockchain, say the authors.

As a result, software developers have created ‘cross-chain bridges’, enabling, for example, a transaction to be validated on the ethereum blockchain and new currency of equivalent value to be created on another chain.

In February this year, for example, an attacker exploited faulty code in a software bridge called Wormhole to steal 120,000 ether tokens (worth around $320m). Wormhole is a bridge between ethereum and the solana cryptocurrency network.

Jump Crypto, the cryptocurrency unit of electronic market maker Jump Trading, was forced to use its own funds to cover the loss.

And despite the fragmentation in cryptocurrency, there is little diversification between networks, says the BIS. This is reflected by the high correlation in prices between different cryptocurrency tokens.

“The price correlation of cryptocurrencies across two blockchains is especially high when the blockchains offer similar services,” says the BIS.

This suggests that investors use comparable protocols to carry out similar transactions on different blockchains: for example, borrowing a stablecoin to speculate on another cryptocurrency, say the BIS economists.

“Crypto cannot fulfil the social role of money,” they say in the conclusion to the bulletin.

“Ultimately, money is a coordination device that facilitates economic exchange. It can only do so if there are network effects: as more users use one type of money, it becomes more attractive for others to use it. Looking to the future, there is more promise in innovations that build on trust in sovereign currencies.”