Lots of cryptocurrency traders got rekt (wrecked) during Wednesday’s market rout. But were their positions liquidated at a fair price?

The latest crypto crash has prompted renewed questions about the market benchmarks used by exchanges.

19 May 2021 marked not only one of the biggest one-day price declines in cryptocurrency, but also one of the largest-ever liquidations of traders’ positions.

During the day, bitcoin’s dollar price plunged by over 30 percent, with the second most widely held cryptocurrency, ethereum, dropping over 45 percent.

According to bybt.com, derivatives contracts on $9bn of underlying cryptocurrency were liquidated on May 19, with the bulk of liquidations coming as traders’ leveraged long positions in bitcoin and ethereum were extinguished by the exchanges at which they held them.

According to bybt.com, Wednesday’s liquidations were the second-highest this year, following a $10bn liquidation on April 18.

Bybt.com data show that the largest cryptocurrency liquidations on May 19 occurred on five exchanges: Huobi, OKEx, Binance, Bybit and BitMEX.

All these exchanges specialise in perpetual cryptocurrency swaps, a popular type of derivative.

First created by BitMEX, a perpetual swap allows traders to gamble on the upwards or downwards movement of cryptocurrency prices without ever paying for the underlying exposure in full.

To open a perpetual swap, traders also have to leave an initial stake (margin) at the exchange on which they place their bets. This margin can be paid either in cryptocurrency or fiat currency.

Many of the cryptocurrency exchanges quoting perpetual swaps offer their clients leverage of up to 125:1.

Given the inherent volatility of cryptocurrency, the likelihood for any trader of an involuntary exit—being liquidated—is therefore very high indeed.

One trader, whose leveraged bitcoin perpetual swap position was liquidated by Binance in the May 19 market plunge, raised a question on social media about the price at which the trade was closed.

“I got liquidated today on coin-margined futures at $29,408 even though [the] Binance [bitcoin/dollar spot price] low was $30,000 and the USD margin mark price was $29,563,” a Twitter user wrote to Changpeng Zhao, Binance’s CEO.

“Can you please help because this feels like an error on the coin-margined contracts,” the trader, called ‘Loko’, tweeted.

According to Binance, liquidations of coin-margined futures take place based not on the basis of its own exchange’s price, but on a ‘mark price’, which is derived from a price index of bitcoin/US dollar prices taken from a number of exchanges.

The mark price differs from the price index by a moving average, calculated over a trailing 30-minute interval.

This methodology, says Binance, reduces the possibility of unfair and unnecessary liquidations when the market is highly volatile, since it “helps to smooth out the price data over a specified period of time”.

Charts taken from the Binance website (see below) show that the price index low during Wednesday’s trading was $29,834.85.

The price at which Loko’s coin-margined future was reportedly liquidated—$29,408—was an additional 0.53 percent lower.

The difference between the mark price and the actual liquidation price appears to reflect a mandatory payment to Binance’s insurance fund. 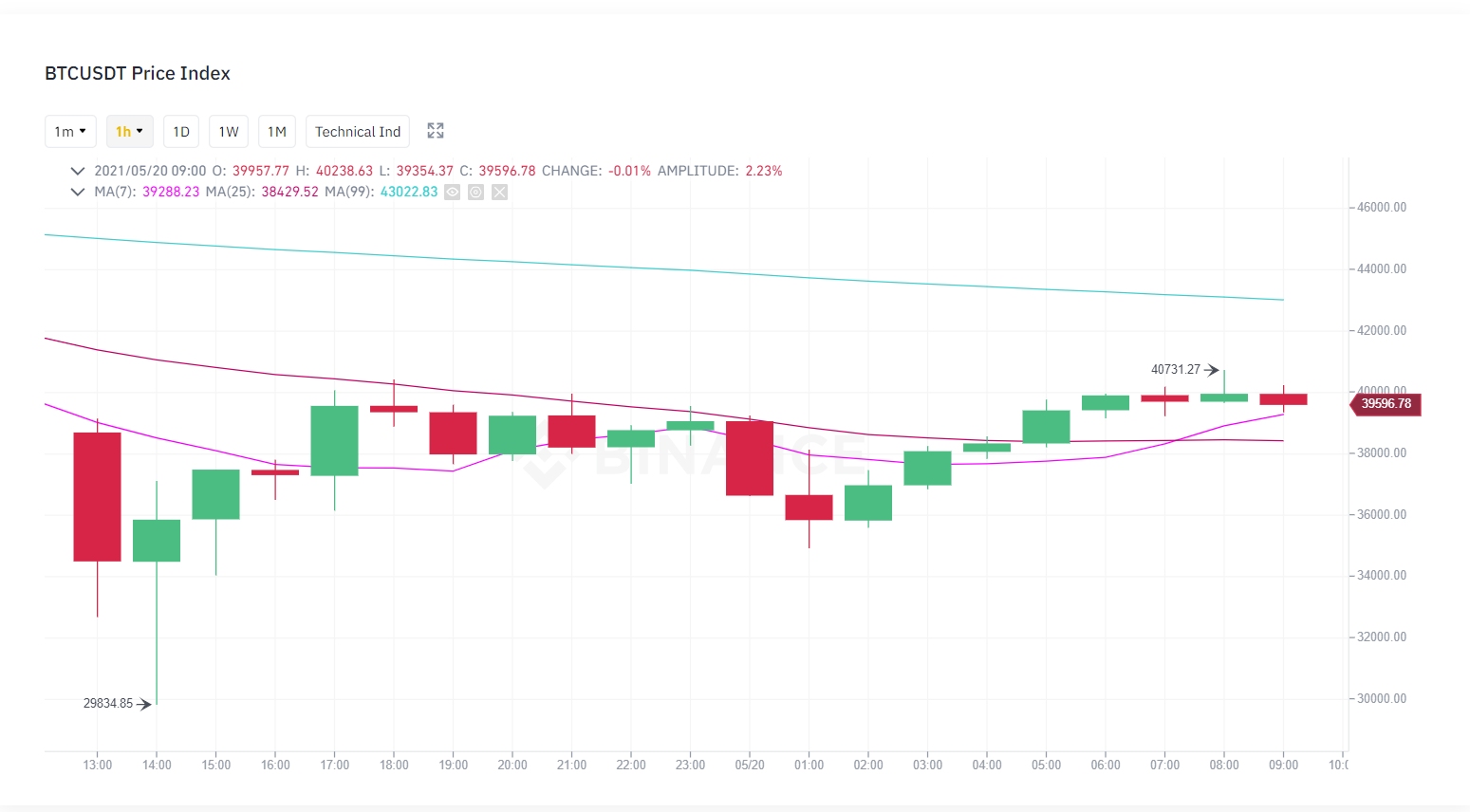 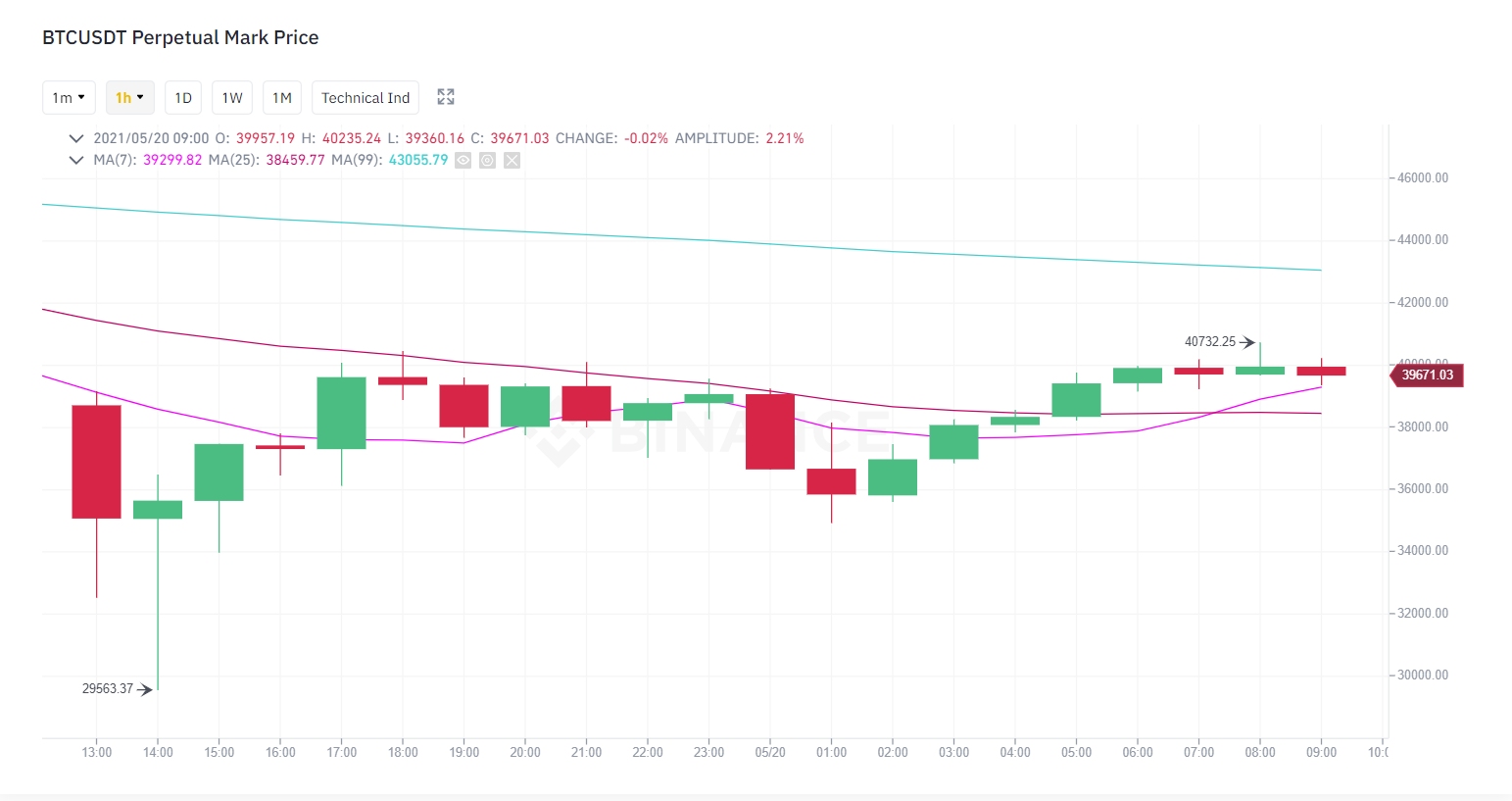 Divergent price lows on other exchanges

It wasn’t just clients of Binance who might have been confused about the prices at which their trades were closed on Wednesday.

The May 19 dollar price lows recorded for bitcoin on other cryptocurrency exchanges varied by up to 6.6 percent (see the table).

And it was the exchanges offering extreme leverage via perpetual swaps that consistently recorded lower prices than the others.

For traders who had held leveraged long positions on these platforms, this meant crystallising an even greater loss

Apart from Binance, the four other exchanges at the centre of Wednesday’s liquidation surge—Huobi, Bybit, Okex and BitMEX, which are shown in italics in the table—said bitcoin bottomed between $28,000 and 29,001, well below the $30,000 low price shown on Coinbase.

For those traders who had held leveraged long positions on these four platforms, this meant crystallising an even greater loss. For those on the other side of the liquidation trades, this meant buying bitcoin at extremely favourable prices.

To add salt to the losing traders’ wounds, bitcoin prices have recovered sharply since Wednesday. The cryptocurrency’s dollar price reached $42,000 in early afternoon trading, London time, on Thursday 20 May.

May 19 dollar price lows for bitcoin

Divergent prices between cryptocurrency exchanges around the world are nothing new. But another problem arose on Wednesday—exchange outages.

During the crash multiple exchanges, including Coinbase, Bitstamp, Gemini, Kraken and Binance reported problems. In many cases, clients were unable to log into trading platforms during the steepest part of the plunge. In others, exchanges ordered the temporary suspension of withdrawals.

According to Sui Chung, CEO of CF Benchmarks, an index firm that specialises in cryptocurrency benchmarks, his firm temporarily excluded two of the five bitcoin exchange price feeds from its Bitcoin Real-Time Index (BRTI) at the most volatile point of Wednesday’s trading.

CF Benchmarks also removed two exchanges from the calculation of its ethereum real-time index for a total of 155 seconds, Chung added.

He declined to say which exchanges had been taken out of the indices’ calculations.

CF Benchmarks is owned by the Kraken cryptocurrency exchange, which is based in the US.

Chung pointed out that these exclusions were allowed under the index rules, which provide for price feeds to be removed from the index calculation if an individual exchange’s order book data are delayed by more than 30 seconds.

The rules also permit an exchange’s price to be removed from the index calculation if it deviates from the mid-price of other feeds by more than a certain amount.

On another page it says the index uses seven price feeds: all the above exchanges, without OKEx.

In a third reference, Binance says the price index for coin-margined futures is calculated as the weighted average of price feeds from just five exchanges: Bitstamp, Coinbase, Kraken, Bittrex and Binance.

The weights of each of the five exchange’s price contribution to the index are not disclosed. Binance also says it weights each exchange price feed “by their relative volume”, but without providing further details.

“Binance reserves the right to update the price index references from time to time,” the exchange’s website adds.

New Money Review asked Binance to clarify whether it had removed any price feeds from its own bitcoin index calculation during Wednesday’s market plunge. The exchange did not respond by our publication deadline.

Up to now, cryptocurrency exchanges have dealt with large-scale client losses—whether from market volatility or catastrophic events like hacks—through self-administered insurance funds, the mandatory haircutting of outstanding client positions or via ad hoc refunds given to clients as an encouragement to keep on trading.

But with the increasing size and scope of the cryptocurrency market—its capitalisation reached $2.5trn earlier this month, while 46 million US citizens alone were recently estimated as owning tokens—increased regulatory scrutiny of the way cryptocurrency firms calculate benchmarks now seems certain.

The US Department of Justice has recently charged the three founders of BitMEX with money laundering offences, while the plaintiff in a separate civil case, filed in October in California, accused the exchange and its executives of having manipulated index prices in the past to ensure that clients positions are liquidated.

BitMEX has denied those allegations, but its motion to dismiss the case will not be heard until the autumn. Before they ran into legal trouble, BitMEX’s founders, who have now left the exchange, had become some of the fastest self-made billionaires in history.

According to CF Benchmarks’ Chung, the market volatility seen this week serves as a warning to those using benchmarks to trade cryptocurrency, especially using borrowed money.

“When you’re talking about derivatives with leverage on a real-time basis, 24/7,” he told New Money Review, “there are those who operate by saying ‘it’s fine, it’ll do, most of the time it works’ and there are others who take a different approach and say ‘it has to work all the time and every scenario has to be planned for’.”

“It’s only at times of market stress that people start to peel the onion a bit more.”

After we published this article Loko got in touch via Twitter and said his/her long bitcoin swap had actually been liquidated by Binance at $28,996.5, not at $29,408, as we had originally reported (see the screenshot below). We have reached out again to Binance for clarification, asking the exchange:

If Binance responds, we will update this article.

Loko’s liquidation price on 19 May

The wild world of crypto derivatives