Many observers argue that the imminent arrival of central bank digital currency (CBDC) could herald the biggest shake-up to the world’s monetary system for nearly a century.

But, say the authors of a new working paper from the International Monetary Fund (IMF), CBDCs may not even get off the starting blocks in many countries for a fundamental reason: they are illegal.

According to Wouter Bossu, Masaru Itatani, Catalina Margulis, Arthur Rossi, Hans Weenink and Akihiro Yoshinaga, the authors of the IMF paper, close to 80 percent of the world’s central banks are either not allowed to issue a digital currency under their existing laws, or the legal framework governing CBDC issuance is unclear.

CBDCs may not even get off the starting blocks in many countries for a fundamental reason: they are illegal

“We reviewed the central bank laws of 174 IMF members and found out that only about 40 are legally allowed to issue digital currencies,” the IMF said in a blog published to accompany the release of the paper.

In 61 percent of the countries it surveyed, the IMF said, the local law only permitted central banks to issue money in the form of physical cash (banknotes and coins). 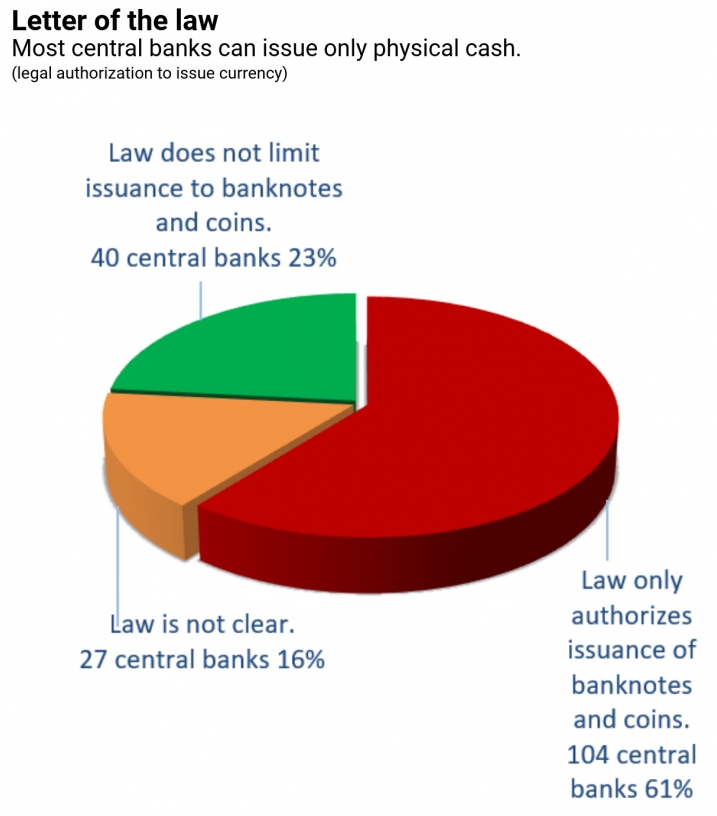 “Any money issuance is a form of debt for the central bank, so it must have a solid basis to avoid legal, financial and reputational risks for the institutions,” the IMF said.

“Ultimately, it is about ensuring that a significant and potentially contentious innovation is in line with a central bank’s mandate. Otherwise, the door is opened to potential political and legal challenges.”

A further challenge for CBDC is to achieve ‘legal tender’ status, said the IMF authors.

Legal tender—meaning that creditors cannot refuse that form of money in payment of a debt—is a prerequisite for CBDC to obtain the status of currency, the IMF said.

“Legal tender status is usually only given to means of payment that can be easily received and used by the majority of the population,” the IMF said.

“That is why banknotes and coins are the most common form of currency.”

Here, there are formidable infrastructure requirements to overcome for CBDCs to achieve equivalent status to traditional currency, said the IMF.

“To use digital currencies, digital infrastructure—laptops, smartphones, connectivity—must first be in place. But governments cannot impose on their citizens to have it, so granting legal tender status to a central bank digital instrument might be challenging,” it said.

“The digital space might become ‘populated’ by private alternatives”

However, governments and central banks are caught in a bind when it comes to the introduction of CBDC, the IMF suggested: if they launch it without proper legal foundations they incur significant risks, but if they delay launching it, other unregulated private sector alternatives might fill the gap.

“In the absence of a clear response, the monetary system will struggle to adopt CBDC widely and the digital space might become ‘populated’ by private alternatives,” the authors of the IMF paper said.

Some say that private sector ‘cryptodollars’ may already be performing the role of digital substitutes for state money.

CBDCs raise a host of other thorny legal questions, the IMF went on in its new paper.

“The creation of CBDCs will also raise legal issues in many other areas, including tax, property, contracts, and insolvency laws, payments systems, privacy and data protection and, most fundamentally, preventing money laundering and terrorism financing,” the IMF said.

“If they are to be ‘the next milestone in the evolution of money’, CBDCs need robust legal foundations that ensure smooth integration to the financial system, credibility and broad acceptance by countries’ citizens and economic agents,” it said.