Automated borrowing and lending transactions on cryptocurrency networks have soared this year. Is this yet another crypto bubble or is there a signal behind the noise?

Where did DeFi come from?

The decentralised finance (DeFi) boom is intensifying. The total value of assets locked up in automated lending contracts recently hit $10bn, up tenfold from the beginning of the year.

Assets locked up in DeFi protocols

It’s not Wall Street, but the numbers are eye-catching all the same.

According to Charlie Morris, founder of crypto data firm ByteTree, DeFi arose from early frictions between cryptocurrencies and the traditional financial system.

“In the early years, investors who wanted to sell their crypto had to do so over an exchange and receive cash, Morris said last week.

It’s not Wall Street, but the numbers are eye-catching

“This was both costly and impractical as the banks and regulators put up barriers in dealing with the crypto exchanges. As we have seen time and again in the crypto space, innovation solved the cash problem by way of stablecoins.”

Stablecoins are cryptoasset equivalents of fiat currencies and are supposed to track their underlying reference asset—such as the dollar, euro or yen—one for one.

The earliest, most successful and most controversial stablecoin is Tether, which has grown to over $14bn in size but whose asset backing is suspect.

Tether and its affiliates are embroiled in multiple lawsuits in the US, including one from the New York State attorney general.

It was a short step from having billions sit around in fiat currency substitutes to seeking ways to put that cash to use, such as by using it as collateral in other transactions: creating a crypto-native financial system, in other words.

And there’s a clear link between stablecoins and the second-largest cryptocurrency network, ethereum, as ByteTree’s Morris explains.

“It has enabled crypto investors to remain within the space”

“Stablecoins are typically built on the ethereum network and are known as ERC-20 tokens. These tokens have a wide range of applications, but one of the great success stories has been to substitute cash within the crypto space,” said Morris.

According to Morris, the development of DeFi was also of fundamental importance for the survival of cryptocurrencies. Bitcoin, the oldest project is now more than eleven years old.

“[Substituting for cash] was one of the early applications for decentralized finance (DeFi) and it has blossomed,” Morris went on.

“It has enabled crypto investors to remain within the space, with a wider choice of investments aside from crypto itself. What this has effectively meant is that the fiat cash that has entered the space has had little reason to leave.”

ERC-20, the technical standard for so-called ‘smart contracts’ running on ethereum, enables anyone in the world to build automated lending protocols.

These algorithms set interest rates in real time, using a predetermined formula that measures the interaction of supply and demand. There’s no intermediary to set the cost of finance.

Stani Kulechov, CEO of Aave, one of the decentralised lending protocols that have risen to prominence this year—Aave now has $1.4bn in ether and bitcoin locked up in DeFi contracts, having only started operations in January—explains how his lending platform differs from a traditional bank.

“Aave is decentralised—we don’t take custody of the funds. We interact only with smart contracts. People send stablecoins into the system to earn interest and borrowers are putting assets there and borrowing stablecoins against them. It’s a permissionless system: anyone can participate,” he told New Money Review.

Aave specialises in so-called ‘flash loans’, finance transactions that take place within the space of seconds.

“A flash loan is when you borrow and return the loan in one ethereum block. For example you can arbitrage between exchanges using a flash loan,” Kulechov told New Money Review.

A new ethereum block appears every 10-15 seconds, on average.

“The only condition is that you need to return the loan, otherwise the borrowing transaction will fail,” Kulechov said.

“You can do as many transactions as you want within a single block. The only limit is the block size.”

And, said Kulechov, flash loans either take place on a collateralised basis or not at all.

“When you do a flash loan you don’t need to rely on the creditworthiness of your counterparty. The condition to take the loan is to return the loan. If that doesn’t happen, the whole transaction will fail, and every transaction in between,” he said.

On its platform, Aave shows deposit and borrowing rates for a range of crypto assets, including ethereum and tether.

You can currently deposit ether tokens and earn a little more than 5 percent, for example, while you can borrow them at just over 7 percent.

DeFi’s supporters see it as making finance more transparent and accessible, as well as improving governance and reducing systemic risks.

But according to critics, DeFi simply creates new costs and externalises them, while operating on fundamentally unstable foundations.

“How to destroy ethereum: use it for something,” long-standing cryptocurrency sceptic David Gerard said last week.

“This cripples it every time. It’s not CryptoKitties—now it’s the DeFi bots bringing Ethereum to its knees, as transaction fees go through the roof.”

“How to destroy ethereum: use it for something” 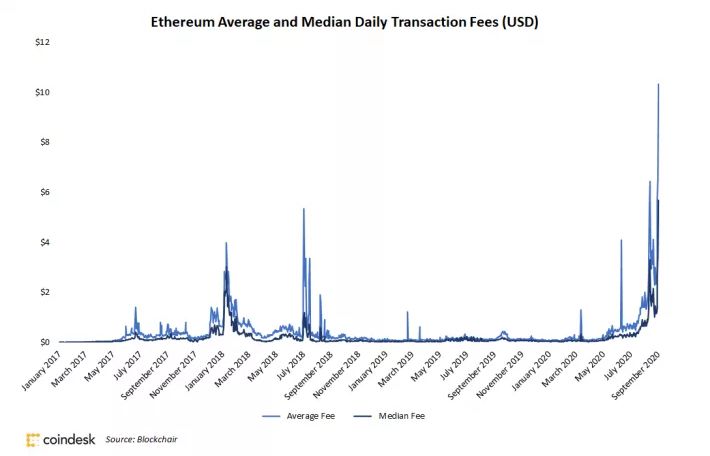 According to Gerard, the DeFi boom has created new opportunities for fraud, both software-based and human.

“In DeFi, the techno-gabble is turned up to 11”

And the jargon of the DeFi world is designed to suck naïve people in, Gerard went on.

“In DeFi, the techno-gabble is turned up to 11, in the hope of fooling people into thinking there’s substance to this shell game,” he said.

But behind the costs and scams, something serious is going on, argues Philip Gradwell, chief economist of crypto investigations firm Chainalysis.

According to Gradwell, DeFi is an early indication of how the financial system will be rewired, in a way that fundamentally changes the economics of innovation.

In a LinkedIn post, he likened the advent of DeFi to the arrival of Amazon in the computer server market two decades ago.

Amazon’s Web Services division (AWS), which now provides the bulk of the firm’s profits, is the backbone for much of the world’s digital economy.

Gradwell predicts that financial trading will switch from a centralised, fixed-cost model to a decentralised, variable cost one, making finance a far more diverse industry.

“For example, AWS transformed fixed server costs into variable costs and this enabled many more technology companies to start up. Similarly, DeFi removes the fixed cost of providing liquidity, which enables many more financial experiments to take place,” he said on LinkedIn.

But he sounded an alarm bell for those currently using DeFi.

“DeFi code frequently does not act as expected and people lose their assets. DeFi does not have [know-your-customer and anti-money-laundering rules], as centralised markets do, which introduces compliance risks,” Gradwell said.