They may not be at war, but relations between the traditional finance and cryptocurrency/blockchain camps have long been marked by mutual suspicion.

A year ago, Sibos, which describes itself as ‘the world’s premier financial services event’, reportedly barred crypto start-ups from exhibiting at its annual conference because it wanted to prevent ‘ragbags’ from attending.

Sibos, which hosted 11,000 attendees at its latest gathering in London last week, is organised by SWIFT, the financial messaging network that underpins the global payments system.

The conference, where a single corporate sponsorship can cost over €100,000, offers four days of addresses, debates and networking opportunities for financiers from around the world.

The main stage at Sibos 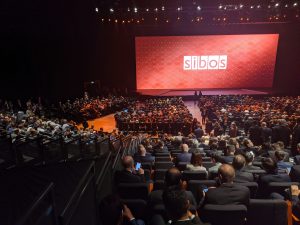 But this year there were signs of a convergence between the worlds of centralised and decentralised finance.

Along with stalwarts of the centralised system like the US Federal Reserve, the European Central Bank, Visa and Mastercard, Sibos’s 2019 exhibitors included several firms from the blockchain camp: for example, ConsenSys, Evernym, Fnality, Hyperledger, R3 and Ripple.

And the word ‘blockchain’ featured in the title of no fewer than 28 panel discussions and presentations during the four-day event.

“Crypto is one of the themes we keep hearing, especially since Facebook announced its Libra project,” Ruth Wandhoefer, a senior adviser at consultancy firm KPMG, told Sibos attendees.

But is this rapprochement real or cosmetic?

The philosophical differences between decentralised and centralised finance (or ‘DeFi’ and ‘CeFi’, for short) still seem stark.

A talk at DeFi summit 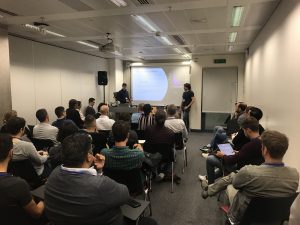 Many in the DeFi movement still see traditional finance as the enemy, said Lex Sokolin, global co-head of fintech at Consensys, a company helping develop the infrastructure around the ethereum blockchain.

“A lot of people in DeFi and crypto believe, ‘You say Wall Street, I say bad’,” Sokolin said at the Imperial College event.

In the UK, for example, the Financial Conduct Authority, the country’s securities market regulator, said in July that it wants to stop the sale of cryptocurrency derivatives and investment products to the general public.

“Rather patronisingly, in my view, regulators think they are there to protect the consumers from themselves,” said Eileen Burbridge, partner at Passion Capital.

“It flies in the face of what we talk about with DeFi. We want it to be accessible, transparent and without intermediaries.”

“The cat and mouse game is now changing”

Another conference participant saw the battle between CeFi and DeFi in geopolitical terms.

“The increased move to regulate and govern money transactions comes because the hegemonic powers are losing out,” said Amir Kamel, a lecturer in defence studies at King’s College London.

“Particularly following 2008, we’ve seen an overreach. We can see how the US is trying to maintain its position and how other actors and alternative systems are reacting.”

“The cat and mouse game is now changing. The ideal is to share this space, to share governance and control, to share the distribution of wealth,” he said.

Such sentiments were echoed by other participants at the DeFi conference.

Far from being a vehicle for crazy speculation, decentralised finance could provide the world with a new kind of utility, said one.

“The endgame of decentralised finance is not-for-profit. Everything will be owned by the users,” he said.

One way to convince regulators of the benefits of decentralised finance is to show them it reduces systemic risk, said a former investment bank derivatives trader.

“The beauty of DeFi models is that they are mostly funded”

“The beauty of DeFi models is that they are mostly funded,” said Jean-Marc Bonnefous, managing partner at Tellurian Capital. “For example, you can’t escrow a trade on blockchain without funding it.”

Bonnefous said that post-crisis attempts by governments to reduce the risk of a financial collapse have merely moved the vulnerability in the system from one place to another.

“Blockchain is much more resilient by nature than the legacy system,” he said.

“It addresses the too-big-to-fail issue. Central clearing—the Dodd-Frank response to the 2008 crisis—has just kicked the can down the road,” said Bonnefous.

“Now it’s not the bank that is too-big-to-fail, it’s the clearing house. But it’s still the same problem. The ultimate argument to the regulator is to say that DeFi is making the system more resilient and more transparent. That could bring them to validate some of the current efforts.”

This summer, Paul Tucker, a former deputy governor at the Bank of England, warned that the collapse of a clearing house would be catastrophic and that policymakers had still not addressed the issue.

Alex Batlin, another former banker and founder and CEO of Trustology, a fintech start-up backed by Consensys, said that DeFi is leading to a fundamental rethink of how financial markets work.

“It’s not just the changing of the infrastructure from centralised to decentralised,” Batlin told New Money Review.

“It’s about how we manage pricing, liquidity, credit exposures, margin calls, and so on. And because of the auditable nature of blockchain, we are achieving full transparency and resiliency, something that the centralised system doesn’t manage,” he said.

Other commentators at the conference recognised the limitations of existing DeFi networks, something that may hinder consumer take-up of finance apps that rely on the new infrastructure.

In August, Vitalik Buterin, co-founder of ethereum, said that the network was nearly full, largely as the result of a sharp increase in the volume of transactions involving tether, a quasi-dollar token.

This is causing a number of ethereum developers to reduce their demands on the blockchain and to seek to perform more processing work elsewhere, said Apex:E3’s Khan.

“We see a number of off-blockchain initiatives,” he said. “From an ideological perspective, some argue these are bringing back a form of centralisation to this decentralised world.”

One example of this approach was given by Tom Pocock, chief executive of the Aztec Protocol, which is also supported by Consensys.

Aztec aims to provide a guarantee of trade settlement in the secondary market for credit, but without placing all the transaction details on the ethereum network itself. Instead, Aztec will register only what Pocock calls a ‘slim-line zero knowledge proof’ on ethereum.

Zero-knowledge proofs, a cryptographic technique invented around three decades ago, allow data to be verified without the data itself being disclosed.

“Our protocol rests on assumptions that are no more complicated than those on which ethereum is based,” said Pocock.

“It narrows the scope of what it verifies but still puts everything on the blockchain,” he told New Money Review.

“We should think about the impact on consumers”

Another challenge for DeFi is usability. Passion Capital’s Eileen Burbridge conceded that DeFi protocols need to be more user-friendly to succeed.

“The lessons of early fintech are that we should think about the impact on consumers,” she said.

“There should be as little impact in terms of overhead and infrastructure as possible. What they should be seeing are improvements in speed of access, accessibility and response times.”

Tellurian Capital’s Bonnefous acknowledged the gulf between DeFi’s ambitions and its existing applications, citing gaming software as an example of the limited current uses of the DeFi approach.

“DeFi will be successful if it funds the economy and banks the unbanked. Gaming is not enough to fulfil that societal mandate,” he said.

It’s the gulf between blockchain technology’s ambitions and its existing use cases that allows such a wide variety of opinions to coexist. And this spectrum of views on DeFi—from dismissive to utopian—seems unlikely to disappear.

“The blockchain people are saying, ‘there will be no banks and stock exchanges in five years’ time’,” Greg Chew, founder of QPQ, a digital transaction settlement and finance platform, told New Money Review.

“But the exchanges have hundreds of years of experience of how to structure markets in a way that works. We’re not going to displace that.”

“Fintech is an echo chamber,” he said.

“I tell people: ‘You haven’t got a cloud computing service in your firm yet. Why are you jumping straight to blockchain?’”

The result seems likely to be a continuing, uneasy coexistence between old and new finance.

“The two worlds—CeFi and DeFi—will run side by side for a while,” said Trustology’s Alex Batlin.

“If you have a 25-year bond that’s half way through its life, there’s not much point switching from the conventional [infrastructure] rails,” he said.

“But blockchain is very good at creating niche products very quickly. Legal issues aside, I can issue a new ERC-20 (ethereum-based) token globally, have it listed on a decentralised exchange and make it lendable within about half an hour. How can the traditional system compete with that on speed?”