Central banks around the world are rushing to prepare digital replacements for their notes and coins.

But the most critical question of all regarding state digital money remains unresolved. Will it allow its users to make transactions in private?

The rise of CBDC

According to the Bank for International Settlements (BIS), four out of every five central banks around the world are now researching, experimenting with or developing their own digital currencies (called CBDC).

Although no country has yet launched a CBDC, China is reportedly close to doing so.

And interest in the subject has shot up since the coronavirus pandemic caused a dramatic jump in the share of payment transactions conducted digitally, rather than using physical cash.

Even before Covid-19 swept the world, Facebook’s announcement last year of its plans for a new digital currency called Libra had moved CBDC to the top of policymakers’ agendas.

CBDC advocates say state digital money offers governments huge benefits, such as the ability to ‘airdrop’ funds to citizens and businesses during times of crisis.

But one thorny problem remains unresolved for CBDC designers.

Should CBDC replicate those privileges? Or should governments use CBDC to track everyone’s private business?

In principle, the path of an individual banknote throughout a lifetime of buying and selling transactions could be traced.

That’s because each note carries its own ID in the form of a serial number. But we don’t use serial numbers in this way.

One surprising reason is that cash’s anonymity promise is protected by the law.

In Anglo-Saxon legal systems, physical cash has a special exemption from the principle that a thief cannot pass off stolen property as his own.

Physical cash has a special exemption

In fact, once you spend stolen cash its original owner can no longer retrieve it via the courts.

“When a thief spends stolen notes and coins, the payee [the person receiving the payment] receives good title to those notes, regardless of the fact that the person who transferred them had none,” Gleeson says in a recent book, ‘the Legal Concept of Money’.

“If a thief steals five £10 notes from your wallet, and you immediately apprehend him and can identify the specific notes, the £10 notes are still yours,” Gleeson explains.

“But if he can get to a shop and spend them before you catch him, you cannot recover them from the shopkeeper,” he explains.

If this appears an open invitation to crime, there are some conditions.

For stolen money to become currency in the eyes of the law, it has to be exchanged for some form of value, and it has to change hands in good faith.

So a gift by a thief of the stolen money wouldn’t turn it into currency. And if the shopkeeper knew that the banknotes were stolen, he’d have to give them up to the original owner.

Constraints on cash use…

In practice, this legal exemption preventing cash from being followed only goes so far.

For decades, governments have put in place numerous constraints on the use of cash in anything but small, everyday transactions.

In 1970, as part of President Nixon’s war on drugs, the US government required banks to report any cash transaction greater than $10,000, a restriction that remains to this day. Governments around the world have since imposed similar requirements.

Many countries have laws preventing the use of cash in transactions above a certain size threshold. You can no longer legally buy a house in many European countries with a suitcase of banknotes, for example.

In another approach, governments have tried to crack down on the illicit uses of cash by withdrawing large-denomination banknotes. For example, in 2019, the European central bank stopped the issuance of 500-euro notes.

But those conducting criminal activity on a large scale seem little affected by these rules.

The global demand for cash is outpacing government attempts to crack down on money laundering: the number of US $100 bills in circulation has more than quadrupled in the last two decades.

The growth in usage of the largest-denomination US bill signals its popularity amongst criminals. 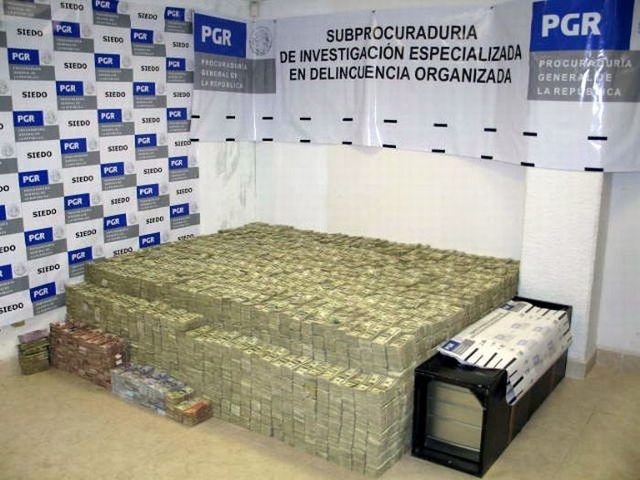 So could you stash away $100m in CBDC and still hope to use it?

As CBDC projects come closer to fruition, all eyes are on China, widely perceived as the global leader in the digital currency race.

Could you stash away $100m in CBDC and still hope to use it?

The BIS suggests that when China introduces its new digital money, it is likely to replicate the prevailing global approaches to physical cash—permitting effective anonymity for smaller transactions, while imposing reporting obligations for large ones.

China’s CBDC design is a hybrid one, where private sector intermediaries are the main interface for CBDC users (for example, they may supply your mobile phone-based digital wallet). Meanwhile, the central bank will periodically receive and store a copy of retail holdings and transactions.

China’s central bank says this design will allow it to keep track of the necessary data to crack down on money laundering and other criminal offences.

But there will be shades of grey, says the BIS.

To accommodate different levels of user anonymity and access, there would be several grades of digital wallets, based on the strength of the know-your-customer (‘KYC’) levels, with stronger KYC requirements associated with higher transaction limits.

“[China’s reporting] limits would generally be linked to existing rules of use of banknotes and coins; details have, however, not yet been established,” the BIS says.

Sweden is pursuing a different approach with its CBDC, called the ‘e-krona’. If you trust its government’s word, only intermediaries will know who you are.

“The design will be such that users remain anonymous vis-à-vis the Riksbank (Sweden’s central bank),” the BIS says.

Similar to China, there would be a tiered approach to identifying money users.

“When it comes to enforcing proper AML/KYC standards, the current level of enforcement as achieved with cash is the model,” the BIS in respect of Canada’s plans.

“The tiering will be chosen such that AML and related issues are not graver than is currently the case,” the BIS says in its working paper on CBDCs.

According to the BIS, Canada believes that the limits for fully anonymous transactions using digital currency may need to be set at a lower level than those prevailing for physical cash.

“Given the new options for illicit use opened by programmable money, achieving the same level of enforcement might require a reduction in the definition of what constitutes a ‘large’ payment,” the BIS says with respect to Canada’s CBDC.

The US is widely perceived as playing catch-up in the digital money race. But if they do introduce a CBDC, US authorities say they want to preserve the anonymity attributes of physical cash, citing China as an example of bad practice.

“The idea of having a ledger where you know everybody’s payments—it’s not something that would be particularly attractive in the United States context. It’s not a problem in China,” Federal Reserve chairman Jerome Powell said in February.

Earlier this month, Fed Governor Lael Brainard fleshed out the US government’s thinking on CBDC.

She said that the US central bank’s Boston branch would be teaming up with researchers at the Massachusetts Institute of Technology to build and test a hypothetical digital currency.

At the same time, Brainard gave no detail on the currency’s likely anonymity features, and she played down the likelihood of the US taking the lead in this area.

“It is important to understand how the existing provisions of the Federal Reserve Act with regard to currency issuance apply to a CBDC and whether a CBDC would have legal tender status, depending on the design,” she said.

“The Federal Reserve has not made a decision whether to undertake such a significant policy process, as we are taking the time and effort to understand the significant implications of digital currencies and CBDCs around the globe.”

The geopolitics of transaction anonymity

CBDCs could have a large geopolitical impact as well.

One reason the US authorities turn a blind eye to the large-scale hoarding of dollar bills around the world is that they benefit handsomely from the practice.

While nearly 80 percent of $100 bills are held outside the US, each one costs the US government only 14 cents to produce.

The extent to which CBDCs will be used outside their country of issue is therefore a big deal.

According to the BIS, China’s CBDC design is likely to allow for use by non-residents.

“If an understanding can be reached with foreign jurisdictions, non-residents (eg tourists and business travellers) could access [China’s CBDC] with a foreign cell phone number for an entry-level wallet,” the BIS says in its working paper.

And in time, overseas businesses could also start to trade in a digital renminbi, says the BIS.

“Looking further into the future, [China’s CBDC] could potentially be used for renminbi-invoiced trade with foreign parties,” the BIS says.