7 hours ago
Hydrocarbons, geopolitics and money
14 hours ago
No Photoshop required
2 months ago
Stablecoins come unstuck again
2 months ago
Celsius network collapses
2 months ago
Blockchain carries seeds of own destruction

Central banks around the world have so far been reticent about issuing their own digital currencies.

Earlier this month, a senior Chinese central bank official announced that the country will soon distribute a digital version of the renminbi via a consortium of local banks and tech firms.

According to Ruth Wandhöfer, a senior adviser at KPMG, China is looking beyond its borders in pursuing a central bank digital currency (CBDC), aiming to promote the international use of its money as a direct challenge to the dominant global role of the US dollar.

“China has done incredible research in the crypto and distributed ledger technology area and would like to use a CBDC as a way to internationalise the renminbi,” Wandhöfer said at the 2019 SIBOS conference in London.

“This is a geopolitical, strategic move by China,” Wandhöfer said.

Currently, the US dollar is the dominant global currency, a status it has enjoyed since the end of the second world war.

The US dollar serves as the unit of account in invoices worth five times more than the US’s share in world goods imports, and three times the country’s share in world exports, according to Bank of England governor Mark Carney, who last month criticised the outsized role of the US currency in the global financial system.

Speaking at the 2019 Jackson Hold gathering of central bankers, Carney called for the introduction of a new multipolar currency system, based on a basket of currencies issued by participating countries.

A central bank digital currency would allow ordinary people and businesses to make payments electronically using money issued by the central bank. Currently, the only form of central bank money most of us touch is physical cash, and that is quickly going out of fashion.

Cash usage drops around the world 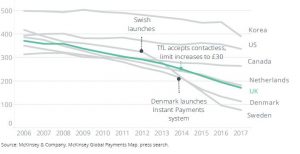 “In Sweden, cash payments have fallen by 80% over the past decade,” the Bank of England wrote in its Future of Finance report, published in June.

“Our analysis suggests the UK may only be four to six years behind,” the Bank said.

Many Western observers worry that a CBDC could destabilise the banking system.

“If central bank-issued cryptocurrencies started circulating alongside private currencies, in an economic downturn you could have the most massive run on the issuers of the private currencies. This is one of the reasons CBDC are a terrifyingly bad idea,” Simon Gleeson, a leading regulatory lawyer, said earlier this year.

“Central banks need to understand the full consequences of opening up the monetary system for major surgery. Hence, central banks are treading cautiously, and only a very few central banks think it is likely that they will issue a CBDC,” Agustín Carstens, general manager of the Bank for International Settlements, said in March.

But while Western policymakers worry about systemic risks, China appears to have strategic goals in mind.

“The digital renminbi project could expand the [Chinese] central bank’s influence over both the domestic and international economy,” Dovey Wan, a partner at Primitive Ventures, a crypto asset investment fund, said earlier this year.

If China’s ‘Belt and Road’ initiative succeeds, said Wan, a digital, borderless currency could facilitate international trade among its 60-plus member countries.

The massive state-sponsored infrastructure project involves over two thirds of the world’s population and up to $1.3trn in investment, according to one estimate.

China could then offer a digital renminbi as a reserve currency to the emerging market economies involved, in direct competition to the dollar, said Wan.

The introduction of a digital renminbi could also help broaden acceptance of non-state-issued money like cryptocurrency, she added.

“Ironically, projects such as China’s, in which governments aim to concentrate control over money, could foster greater competition from private systems of money such as bitcoin,” Wan said.