The US financial system was designed to ensure that no single entity would ever dominate the nation’s money.

But the downside of this legacy is becoming ever-clearer when it comes to payments.

As our economic activity is increasingly conducted online and over mobile devices, the speed at which money moves around could have a real impact on our collective prosperity.

Boston Consulting Group says that countries that move to digital payments can boost their economies by up to 3 percent. This improvement comes from greater financial inclusion and faster access to funds, the firm says.

But the US economy still relies on a payments infrastructure that’s complex, duplicative and slow. And it’s one that the country’s policymakers may have trouble speeding up.

A chart published by the Chicago Fed in 2012 shows the complexity of the US’s financial plumbing. 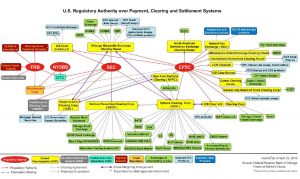 Unlike most countries, which have one, the US has two systems for handling large-value payments: one (FedWire) owned and run by the central bank, the other (CHIPS) privately owned and run by commercial banks.

And the country has several competing systems for handling retail payments, including cheque clearing centres, the Automated Clearing House (ACH) for electronic payments, and proprietary card networks like those run by Visa and Mastercard.

A separate payment system run by the Fed, called NSS, processes cash movements relating to the settlement of transactions in shares and bonds.

The US central bank said it hopes to introduce a system for real-time money transfers in the US by 2024.

“The rapid evolution of technology presents a pivotal opportunity for the Federal Reserve and the payment industry to modernize the nation’s payment system,” the Fed said in a press release announcing its plans for a new faster payments system, called FedNow.

“Everyone deserves the same ability to make and receive payments immediately and securely, and every bank deserves the same opportunity to offer that service to its community,” said Federal Reserve Board Governor Lael Brainard.

The Fed’s ambition is for banks of every size in every community across the country to provide real-time payments to their customers, the central bank said.

The US has over 10,000 banks, all authorised to take deposits, as well as hundreds of non-bank payment providers.

Historically, electronic payments across the ACH network could take two to three business days to complete. ACH is governed by an entity called NACHA, which is controlled by US banks.

“The big banks exercised their veto power to vote it down”

“Back in 2011, the big banks decided it was not in their best interest to speed up payments because faster transaction times would reduce all that big revenue from wire, interchange, and overdraft fees,” Karkal wrote in Venture Beat earlier this week.

“While the majority of NACHA was in favour of same-day payments, the big banks exercised their veto power to vote it down,” said Karkal.

When the banks finally agreed in 2016 to introduce same-day payments across the ACH network, they only did so after insisting on a new interchange fee to compensate them, said Karkal.

Rising costs of doing nothing

The costs of delaying the shift to a more efficient payments system are mounting, says Aaron Klein, a fellow at the Brookings Institution.

“Poland, Chile, Mexico, Japan, South Africa, the European Union and the UK all have faster payments systems,” Klein said on a podcast with American Banker, broadcast in June.

“I can deposit a cheque from Slovenia to France faster than I can make a payment from Minnesota to Florida.”

“We need faster payments now. I’m not willing to wait ten years for the government to build a new system. By my estimate, the lack of real-time payments costs the US economy from $10bn to $25bn a year,” Klein said.

Despite the country’s competitive advantage in technology, it’s going to take coordinated action to get round the inertia built into the current US financial system, say Professors Stephen Cecchetti and Kermit Schoenholtz, authors of the Money and Banking blog.

“Why is the home to Microsoft, Google, Amazon, and Facebook behind in an information-intensive area like payments?”

“Why is the home to Microsoft, Google, Amazon, and Facebook behind in an information-intensive area like payments? First, other countries have leapfrogged outdated technologies like paper checks,” said Cecchetti and Schoenholtz.

“The other key factor delaying a shift to alternative payment mechanisms is what economists call a network externality: the more people who use one form of payment, the more valuable that method is to the people who are already using it. And, by the same token, the more expensive it is for someone to move away from the prevailing mechanism,” they said.

Meanwhile, the US central bank is dependent on the support of the country’s legislature for its payment plans to be implemented, according to Sila Money’s Shamir Karkal.

It’s unlikely that such a law could pass in the next 18 months, says Karkal, but by January 2021 the political makeup of the US Congress could be different.

And the Fed is still proving conservative in other ways, according to the Sila Money CEO.

In the same month as Facebook released its plans to move into payments, the UK central bank caused a stir by saying that it is prepared to admit non-banks to its payment infrastructure. But the US central bank shows no signs of following suit: a mistake, according to Karkal.

“Now that the Fed is building a new payment system, it could fix those issues”

“The dollar has been electronic for a very long time, and the back-end systems on which it runs (such as FedWire, NSS or ACH) are not public, they are not transparent, they are not blockchain-based, and they are not easily programmable,” he said.

“Now that the Fed is building a new payment system, it could fix those issues,” said Karkal.

“It could make the system blockchain-based, more programmable, and more accessible. But judging from what the Fed has published, the only entities that will have access to FedNow are the same as those that have access to ACH, i.e., banks. This means it will still be a closed, bank-only system, which is a shame because they could have done better.”