The Bank for International Settlements (BIS) has been described as ‘the world’s most exclusive club’.

Its bimonthly policy meetings, held in Basel, Switzerland, bring together the heads of all the major global central banks. The BIS also hosts important committees, such as the G20 Financial Stability Board and the Committee on Payments and Market Infrastructures.

Since the second world war, a period of unprecedented economic expansion, the BIS has arguably played the most important role in setting the ground rules for the global financial system.

The BIS hasn’t shirked controversy. It provided an early, outspoken warning of the 2008 crisis, at a time when politicians and many central bank heads were ignoring the dangers of the credit bubble. More recently, it has criticised bitcoin and cryptocurrencies, saying they don’t work well, and that history is a graveyard of failed currency experiments.

In an exclusive interview with New Money Review, Morten Bech, head of the secretariat for the Committee on Payments and Market Infrastructures, talks about the ongoing revolution in payments and payments technology.

Below we provide a summary Q&A: you can hear the full interview by listening to our latest podcast.

New Money Review: What is the role of the BIS in the global payments system?

Morten Bech: The BIS’s main role is in providing banking services for the world’s central banks, and in providing a forum for regular meetings of central bank governors and senior officials. So, from an operational perspective, the BIS only has a small role in the global payments system and that’s primarily through its role as the bank of central banks.

But we play a key role in payments policy. This is because the BIS hosts the Committee on Payments and Market Infrastructures (CPMI), the global standard-setting body for payments, clearing and settlement. 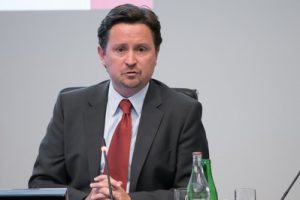 New Money Review: In recent years, the speed of payments has accelerated dramatically. We’ve seen a shift in most countries to real-time gross settlement (RTGS) systems for wholesale payments. And in many countries we now have faster payment schemes for retail transfers. How far away are we from a global real-time payments system?

Morten Bech: We’re still a fair distance away from that goal, so while developments are happening in this area, they are doing so slowly.

And in the last decade and a half, we’ve seen the introduction of the Continuous Linked Settlement (CLS) system for foreign exchange (FX) transactions. CLS connects the different RTGS systems and allows FX transactions to be settled on what we call a payment-versus-payment basis. This helps eliminate Herstatt risk.

New Money Review: Non-banks are playing an increasingly important role in the payments system. What do you make of this development?

Morten Bech: From a personal perspective, I think it’s great. As a Dane who has lived for a long time in the US, and who is now living in Switzerland next to the eurozone, I often manage transactions in four different currencies. I use some of the new non-bank service providers, because their services are fast, convenient and low-cost.

But it is important that these non-banks are not better at payments because they arbitrage the existing rules or regulations or are somehow less safe. Insofar as they might be introducing additional risks, we need to monitor things very closely.

New Money Review: To what extent has this already happened? When it comes to payments, have non-banks been put at a competitive advantage to banks?

“The direct impact of DLT on payments is so far limited”

New Money Review: What is the impact of distributed ledger technology (DLT) on payments?

Morten Bech: The direct impact is so far limited. In the greater scheme of things, payment volumes in cryptocurrencies are still small.

But there’s a lot of experimentation with DLT, both in the private and public sectors. And a lot of the current upgrades of existing payment systems are driven by the wish either to be interoperable with new DLT systems, or to be able to compete with them if and when they arrive.

Morten Bech: It could. But I look at DLT as one of the manifestations of a longer-term trend towards the digitalisation of payments. So far, the digitalisation has centred largely on making what were previously paper-based processes electronic.

The true believers in DLT see it as an opportunity to rethink many of these processes from scratch.

One of the problems with the legacy payments, clearing and settlement systems is that they require a lot of messages to be sent between intermediary financial institutions. These messages are used to confirm trades, beneficiaries, amounts and so on. DLT promises to make a lot of this messaging redundant.

New Money Review: Many central banks are discussing the issuance of new forms of digital currency (CBDC). What are the key policy questions?

Morten Bech: There are various forms of CBDC under discussion. At the BIS, we distinguish between four kinds: on the one hand, there’s what we call general-purpose CBDC, which is accessible to all, and wholesale CBDC, which is only accessible to financial institutions; when it comes to the underlying technology, we distinguish between account-based CBDC, a technology we know quite well, and CBDC issued as tokens, which is more innovative.

If we focus on broadly accessible CBDC, which can be thought of as an electronic replacement for cash, a key decision for central banks is the future degree of anonymity of transactions.

If and when central banks issue such digital currency, I’d expect to see a trade-off between transparency and demands for anonymity and privacy. Some transactions in some states of the world may remain anonymous, but not in all states. If you have a court order, for example, you might be able to see details of the transaction.

New Money Review: What is the role of the state in ensuring trust in payment services?

Morten Bech: Payments are about moving money, and money is about trust. The only thing backing money today is either the sovereign or the state. If there’s no trust in the state, there can be no trust in money. Venezuela is a recent example of what happens to money when trust in the state disappears.

You can have the greatest payments system in the world, but if there’s no trust in the money it’s a bit pointless. If money is trusted, the state should ensure that the transfer mechanism is also trusted.

New Money Review: What can the official sector learn from the success of new payments technologies, like WeChat or Alipay in China, or M-Pesa in East Africa?

Morten Bech: First, that the private sector is pretty good at innovating. Second, that regulation tends to follow innovation, as I mentioned earlier.

So it’s really important for the official sector to keep up with technological changes and to monitor these new payment systems, particularly if they are being used to hold customer funds.

And if these new platforms move into other types of financial services, like lending, it’s pretty clear that further supervision is needed.

“Payments are the new cool”

New Money Review: What are the implications of the recent rapid changes in payment technology for broader questions like identity, the traceability of money and privacy? And how far have we gone in debating these questions?

Morten Bech: A colleague of mine, Tara Rice, has co-authored a forthcoming so-called Geneva report on the future of financial intermediation.

The authors asked big banks which financial products and services are likely to be most affected by technological change at the moment, and in five years’ time. They also asked which area of financial intermediation is currently seeing the greatest competition.

Interestingly, payments topped the list of answers for all three questions. As a central bank governor told me recently, “payments are the new cool”.

We’re seeing massive changes and, to be honest, I have no insight into what the future steady state is going to be.

You might say that innovations have always changed the way we pay and then ask if anything is different this time.

But what is different this time, when compared to previous bouts of innovation, is that people are trying to change two areas of the monetary system simultaneously: money as a settlement asset, and the way we transfer money.

“Bitcoin’s appearance has challenged parts of the current paradigm”

New Money Review: Are changes in payments technology influencing the way we think about money itself?

Morten Bech: Yes, I think so.

Even though the BIS isn’t very fond of bitcoin—our general manager has referred to it as a combination of a bubble, a ponzi scheme and an environmental disaster—its appearance has undoubtedly challenged parts of the current paradigm, in particular the existing bank-centred payments system.

One good thing about this period of flux is that the consumer experience has been driving a lot of these changes, which is good for everyone.

But it’s for the official sector and for private sector stakeholders to ensure that the underlying plumbing works, is resilient and doesn’t create any new risks.