11 hours ago
Hydrocarbons, geopolitics and money
19 hours ago
No Photoshop required
2 months ago
Stablecoins come unstuck again
2 months ago
Celsius network collapses
2 months ago
Blockchain carries seeds of own destruction

The opening up of banks’ customer data to financial technology (‘fintech’) firms has been hailed as a revolution. Fintech promises new, user-friendly services while making online payments easier, safer and cheaper.

There’s little doubt that the regulatory push for open banking has led to a hyper-competitive, anarchic fintech marketplace, together with soaring valuations for perceived winners.

But some market participants are already looking beyond the current period of creative destruction, towards a future where financial services become ‘rebundled’.

Curve, a London-based start-up that allows customers to consolidate multiple payment cards into a single card running on the Mastercard platform, is one firm thinking how best to benefit from this future recentralising trend.

“Your money is completely disconnected and fragmented”

I meet Shachar Bialick, the company’s chief executive, in his attractive, open-plan office a stone’s throw from London’s British Museum. Curve is the fifth start-up company launched by Bialick, a graduate of business school INSEAD and a former member of Israel’s special forces. He is an intense, engaging and open interviewee.

“The problem that Curve is solving is the fact that your money is completely disconnected and fragmented,” Bialick tells me.

“That trend is only accelerating. Banks and fintech firms are coming out with new products every week.”

But Bialick sees a future reintegration trend in finance as inevitable. He draws parallels with the evolution of other information technology services.

“There have been four major rebundling movements on the internet: Netflix in TV, Spotify in music, Amazon in e-commerce and Google in information,” he tells me.

“The same will happen with banking,” predicts Bialik.

Bialick focuses on digital music as a guide to what might happen next in finance.

“It always starts with the unbundling of the distribution,” says Bialick.

“At the beginning, everyone can be the publisher of their own music. But then we see the beginning of rebundling,” he says.

“Now, Spotify identifies rising stars and pushes them through its own discovery channel, based on data, to the right audience. Ten years after its launch, Spotify has become Warner Music,” Bialick goes on, referring to one of the giants of a past music business that relied on the control of both content and distribution.

Finance executives need to change their mindset to think more about scale and connectivity, he explains.

But finance is different from music. And anyone proposing to help consumers manage their money has to bear in mind our innate reticence on this topic, Bialick says.

“Money is always a very sensitive matter. People are often not educated about money, they are concerned about it, it’s hard to manage, it’s always perceived as expensive. People may not even want to see their money,” he says.

Instead, they would appreciate a form of hand-holding, he goes on.

“People would like their own personal CFO—someone who will look at the data, gather the insights and come to them every so often and ask, based on the data, ‘do you want to do A or B?’”

Bialick tells me that he views the end game of the rebundling trend in finance as the creation of a new operating system for money. This operating system will be a technology that sits on top of the networks, products and services that comprise traditional banking.

So what kinds of firm will sit at the top of the heap in the new financial industry, I ask him.

“The companies that will be the most evolved when it comes to risk and understanding you as a customer will be the winners,” he replies. “The data received by all those companies will be the same.”

Bialick shows me a visual representation of his predicted future in the form of a tech ‘stack’.

“A key characteristic of the stack is that every layer connects the layer below it, but not vice versa,” he explains.

“Also, the higher you are on the stack, the more of a tech company you are and the less of a financial company. That’s also evident in the way markets are valuing each layer of the stack.”

The new tech stack, according to Curve 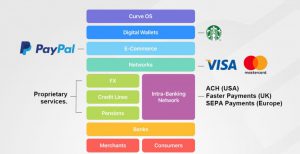 I ask Bialick to expand on valuations.

“Banking will move to the cloud,” he tells me. “Most of the bank incumbents will become transactional pipes.”

“Some products of banks will become commoditised: deposits, credit, even mortgages. The value of publishing products will decrease over time. The value will be left with the distributors, the platforms and operating systems.”

“We will continue to grow until we have built the category”

There seems some way from Curve’s current main product, which amalgamates payment cards into one, to the apex of a technology pyramid covering money as a whole. But Bialick makes it clear that’s where he hopes to take his company.

“We will continue to grow until we have built the category—the operating system for money—and become category king,” he tells me.

Bialick explains that he runs his company by delegating substantial responsibility to so-called scrum teams, an organisational structure used by army special forces. Granted significant operating freedom, each scrum team is set a single goal, such as a monthly target of a 30 percent increase in users.

“Autonomy, purpose and mastery are key for every successful start-up”

Following our meeting, an article in Wired magazine draws attention to questionable management practices at Revolut, another fintech firm.

Wired alleges that Revolut has poor management practices, creating low morale and pushing staff to burnout. Wired also provides evidence that Revolut has used questionable recruitment techniques, such as requiring interviewees to sign up 200 new users to the service before moving to the next interview stage.

I email Bialick, asking him whether Curve’s own heady growth ambitions and his delegated management style create a risk of similar internal practices. He responds quickly.

“Working in a start-up means hard work,” Bialick writes.  “The work-life balance will never be as good as at a more established company, with more resources available.”

“But an approach of dictatorship and leashing the team is not sustainable, creates bad employee retention, and means that the company’s culture is not set for sustainable growth,” he says.

“It is not easy to maintain a high-performing team while growing a company, therefore it is critical to cement the principles of our culture within each team member.  As long as we will keep this in mind, and aim to hire ‘A’ players, I believe the risk of Curve of hitting the same issue Revolut now has is minimal,” Bialick continues in his email.

“Autonomy, purpose and mastery are the key for every successful start-up, and for happy team members that can learn and evolve their skills and career,” Bialick concludes.