Bitcoin’s volatility has fallen by 70% in five months, reflecting calmer trading since the cryptocurrency’s price peak at the end of 2017.

Volatility is a widely used measure of risk across the financial markets.

As at 6 June 2018, the annualised volatility of the US dollar price of bitcoin, measured over the previous thirty days of trading, was 41.85%, compared to a peak of 141.8%, witnessed on 3 January.

The January volatility spike came shortly after a price reversal in the cryptocurrency. Having risen over 2000% during 2017, bitcoin’s dollar price topped out at $19,476 on 17 December, according to data from Coinmetrics, before declining sharply in the first quarter of 2018. 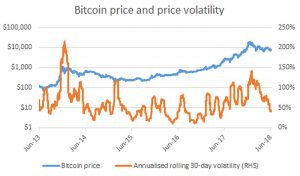 The early 2018 volatility spike was not the highest on record for bitcoin, however.

The cryptocurrency saw even higher levels of risk during the late-2013 bull market, which saw prices rocket from under $100 a coin to over $1000 in under five months. In December 2013 the annualised rolling 30-day volatility of the cryptocurrency hit 215%.

Bitcoin subsequently entered a severe bear market, losing over 90% of its value during 2014 and 2015 as investors shunned the cryptocurrency following the hacking and bankruptcy of the most popular exchange during the 2013 price run-up, Mt. Gox.

Many observers have argued that cryptocurrencies’ volatility makes them a poor store of value, hindering their adoption. Acting as a store of value is one of the textbook functions of money.

For example, in March 2018, Mark Carney, Governor of the Bank of England, said:

“Cryptocurrencies are proving poor short-term stores of value. Over the past five years, the daily standard deviation of Bitcoin was ten times that of sterling. Consider that if you had taken out a £1,000 student loan in Bitcoin in last December to pay your sterling living costs for next year, you’d be short about £500 right now. If you’d done the same last September, you’d be ahead by £2,000. That’s quite a lottery.”

At the current level of just over 40%, bitcoin’s price volatility is around four times higher than the most widely traded global fiat currency pairs. As at 6 June 2018, the volatility of the dollar/euro and dollar/yen foreign exchange rates, measured over the previous year, was around 11%.

“The biggest contributor to bitcoin’s volatility is its size”

Other observers say that bitcoin’s volatility is not necessarily a deterrent to those wishing to save in the cryptocurrency.

“I don’t think price volatility really affects bitcoin’s use as a store of value,” Andreas Antonopoulos, author of the most popular technical guide to bitcoin, said in a YouTube video released yesterday.

“While volatility certainly affects bitcoin’s use as a medium of exchange, store of value is a long-term perspective,” said Antonopoulos. “Even if bitcoin hasn’t worked well as a store of value over three months, it has done very well over one and three years.”

Antonopoulos views price gyrations as an inevitable consequence of the early stages of adoption of the cryptocurrency.

“I would say the biggest contributor to bitcoin’s volatility is its size,” said Antonopoulos.

“Bitcoin is a global market and in the context of global currencies, at around $100bn, it’s still tiny. As bitcoin gets bigger, becomes more liquid and is used for different purposes, its volatility will go down.”