The decentralisation inherent in cryptocurrency networks like bitcoin is valuable for its governance benefits, according to Hyun-Song Shin, head of research at the Bank for International Settlements (BIS).

But this decentralisation comes at a cost—the creation of a powerful new class of insiders.

In a lecture last week at London Business School, Shin said that the large financial rewards collected by cryptocurrency miners and exchanges are an increasing cost for network users, largely nullifying the benefits of having a universal ledger of transactions.

According to Shin, citing recent research by Igor Makarov and Antoinette Schoar, around three-quarters of the ‘real’ transactions on cryptocurrency networks are tied to the accounts of large intermediaries, such as cryptocurrency exchanges or digital wallets.

Decentralisation alone is not enough

Decentralisation in cryptocurrency has clear governance benefits, says Shin, with a network’s development influenced by the view of the community as a whole, with in-built checks and balances.

However, he went on, citing Vitalik Buterin’s ‘scalability trilemma’, a cryptocurrency network cannot be decentralised, secure and scalable at the same time, and cryptocurrency design involves trade-offs between these three attributes.

Specifically, said Shin, the network validators (miners) have to be rewarded to keep processing transaction activity, and the pay-offs need to be such that following the protocol is an equilibrium of the game.

Shin cited the recent rise in ethereum ‘gas’ fees (the fees paid to ethereum miners for the computing energy required to process and validate transactions on the cryptocurrency’s blockchain) as an example of the economic rents required to keep cryptocurrency networks operating.

Last week, half the participants in a cryptocurrency venture bidding $40m for a copy of the US constitution at a Sotheby’s auction found themselves out of pocket when ethereum gas fees ate up their contributions. 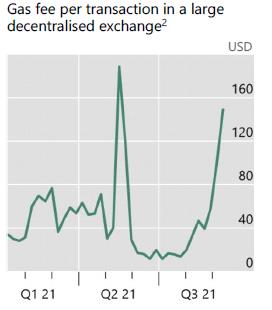 Shin also said that miner extractable value (MEV)—the profit cryptocurrency miners can make by reordering transactions for their own benefit—has been rising, reflecting the recent increase in activity on ethereum. MEV has been called “crypto’s version of Wall Street front-running” by one critic.

“In the past several years, the exploitation of [cryptocurrency miners’] transaction ordering power has become a major issue,” Angela Walch, professor of law at St. Mary’s University, Texas, told a US congressional committee in July.

“The decentralised blockchain tends to entrench the position of insiders”

The BIS head of research said last week that the rising power of intermediaries is now a feature of cryptocurrency—in contrast to its original selling point.

“In stark contrast to the stated ideal of democratising finance and levelling the playing field, the decentralised blockchain tends to entrench the position of insiders,” Shin said.

He questioned the long-term viability of the networks.

“While the flow of new users can feed the rents in the blockchain’s growth phase, its ultimate viability when the flow of new entrants dries up and rents are squeezed is uncertain and tenuous,” Shin said.

Getting the incentives right

However, Shin did not rule out cryptocurrency’s utility in countries with less stable financial systems.

In this case, getting the incentives right is critical, said Shin, who is an expert in game theory.

“If there is a case for decentralisation, market design and ensuring incentives of the validators matter,” he said.

The hidden politics of cryptocurrencies