Could a bitcoin arbitrage-gone-wrong have broader consequences for the cryptocurrency market?

‘GBTC’, the US-listed Grayscale Bitcoin Trust, is a true bitcoin whale, owning more than 3 percent of the cryptocurrency in issue. Its current holdings of 654,000 bitcoin are not far short of Satoshi Nakamoto’s never-touched, 1-million-coin stash.

According to Max Boonen, director and founder at cryptocurrency market maker B2C2, GBTC is notable for other reasons too.

In a recent interview with New Money Review, Boonen said a past arbitrage opportunity linked to GBTC has helped promote the borrowing and lending industry that now surrounds cryptocurrency.

“Firms like BlockFi, which offer interest on cryptocurrency deposits, were using the past premium on GBTC to help fund their business,” Boonen said.

“They could borrow bitcoin from their clients (with or without collateral), put the bitcoin into GBTC, hold the GBTC shares for the six-month lock-up period, then sell them on the secondary market with a premium attached,” Boonen said.

BlockFi offers interest rates starting at 6 percent to clients willing to deposit bitcoin with it.

During 2020, GBTC shares traded at a premium to the fund’s net asset value (NAV) of 10-40 percent, offering substantial profits to those able to exploit it.

But the arbitrage wasn’t risk-free. It only worked if the GBTC premium was still there when your individual lock-up period ended.

And that premium has now disappeared. Since February this year, GBTC has been trading at a discount to NAV. 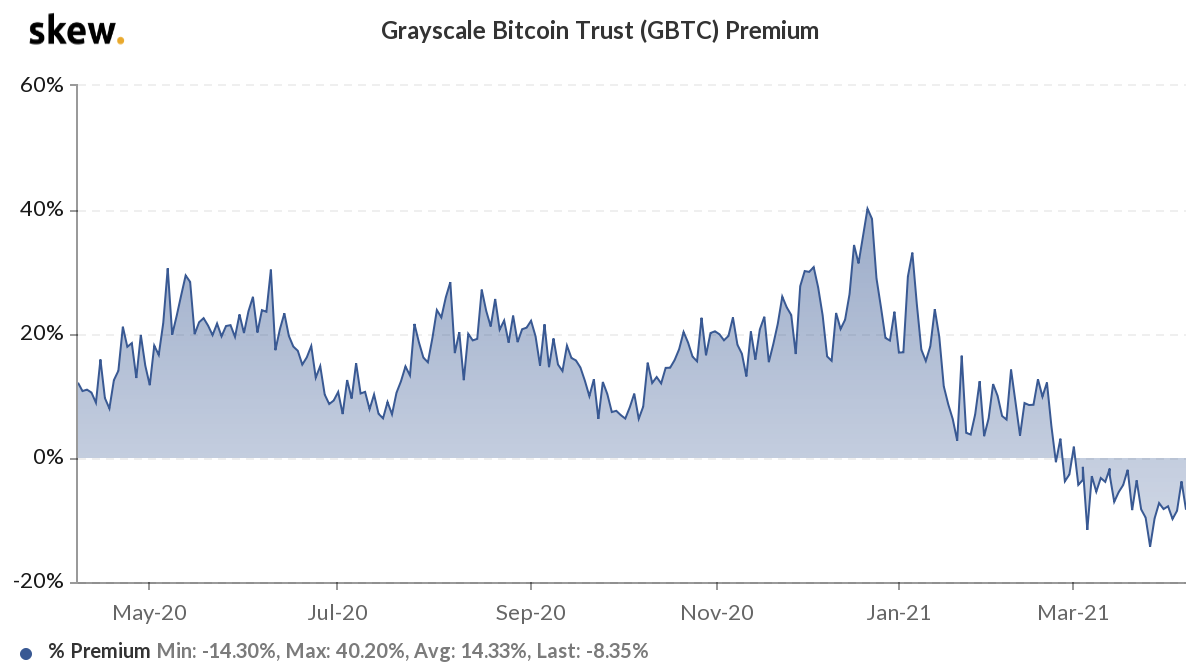 Wave of GBTC shares to exit lock-up from April 18

Now, some of the past subscribers to GBTC are about to face the consequences of this arbitrage trade gone wrong.

“In the coming weeks, a lot of GBTC shares are coming out of lock-up. It will be interesting to see what happens there,” Boonen said.

The shares Boonen is referring to are those purchased during a GBTC buying spree that started in October last year, when the bitcoin price was just over $10k, less than 20 percent of its current level.

These fourth-quarter purchases of GBTC—the most sustained bout of buying since the Grayscale bitcoin trust was created—are circled in red on the chart. They will come out of the lock-up period between April 18 and the last week of June. 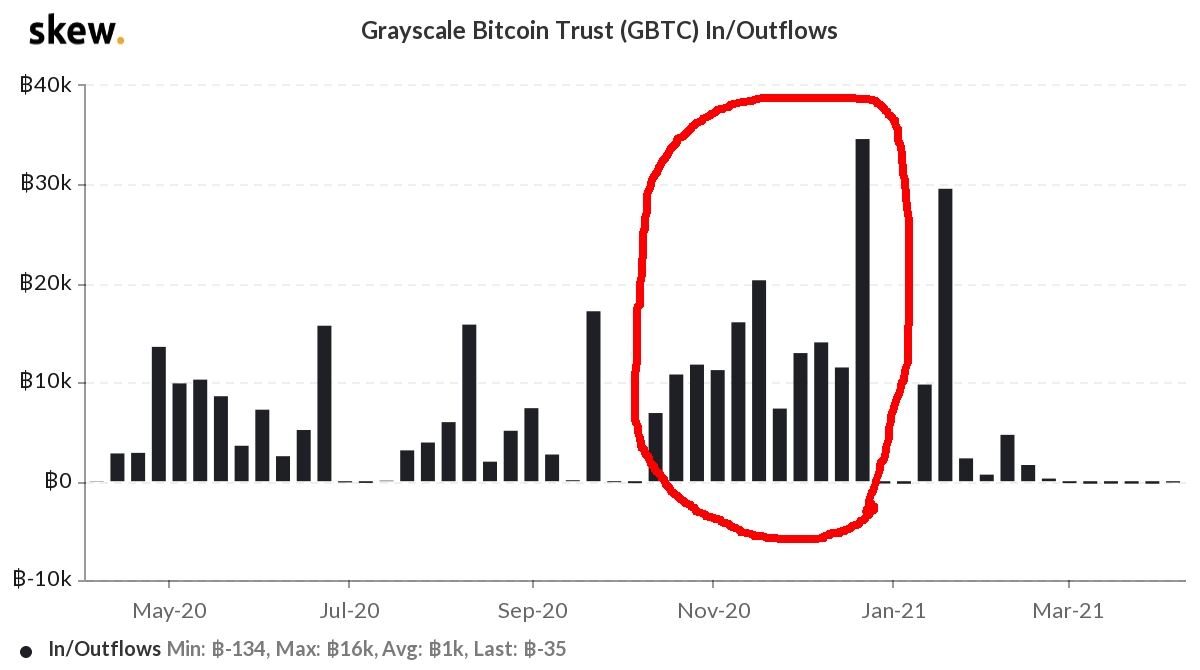 Sitting on a discount

What will those who bought GBTC as part of an arbitrage now do?

One option is to sell now and crystallise a loss. Another is to hold on and hope for the discount to disappear.

Those in the latter camp may be left waiting. As my former colleague Dave Nadig wrote recently, GBTC has the disadvantage—when compared to an equity CEF—of lacking a means to tether its price to its net asset value.

Normally, as CEF discounts increase, buyers move in to gain cheap exposure to the underlying asset, helped by the prospective income on offer.

“A lot of CEFs have significant yields, and as discounts appear, those yields go up,” Nadig said.

“For many CEF investors, that’s all that matters. But bitcoin doesn’t yield anything. It simply is. So that CEF cushion doesn’t exist.”

Digital Currency Group (DCG), which owns the Grayscale unit that runs GBTC, gained authorisation a month ago to buy up to $250m of the trust’s shares, a move clearly aimed at stopping the discount from blowing out further.

On the same day, DCG said it was stopping any further inflows to GBTC, capping the trust’s holdings of bitcoin.

And, earlier this week, DCG said it was committed to turning GBTC into an ETF, a step that would in theory remove any discount or premium.

Converting the closed-end fund to an ETF would force the GBTC price to trade at a level that reflects its holdings of bitcoin.

But the US securities regulator has yet to approve any bitcoin ETFs, and there’s no timetable for it to do so.

There are forces working in the opposite direction—against the removal of the discount—too.

DCG is currently raking in a massive $760m a year in fees from investors. And any discount to net asset value must disincentivise investors thinking of selling GBTC shares.

What would happen if DCG’s stated aim of reducing the discount failed?

However, BlockFi said in March that its position in GBTC was ‘substantially less’ than 20 percent of its $15bn total assets.

B2C2’s Boonen doesn’t think that a failure of a firm conducting a deposit-taking and lending business in cryptocurrency would necessarily have a systemic impact.

“It wouldn’t be great, but I’m not sure it would be a disaster either,” he told me last week.

“In cryptocurrency, we don’t yet have long daisy chains of credit exposures. The people with credit exposure to BlockFi are largely retail investors with relatively small positions. Institutions, as far as I’m aware, don’t have major exposure to this firm.”

Others, however, see more significant risks.

A now-deleted website called DitchBlockFi.com (archived version here) said in March that BlockFi had over $2bn in unsecured loans to proprietary trading firms.

DitchBlockFi’s anonymous authors—they described themselves as ‘a group of people including employees at major crypto lending desks, investors in the crypto space and DeFi founders’—said BlockFi’s activities were putting the broader cryptocurrency market at risk.

“Crypto is about transparency, openness and reinventing finance without the flaws and moral bankruptcy inherent in banking and tradfi (traditional finance). BlockFi’s practices are anti-crypto and we created this website to protect users of BlockFi and the crypto community from losing money,” DitchBlockFi said.

“A single default can easily wipe out BlockFi’s equity base and put them into insolvency,” DitchBlockFi warned.

This statement, however, was made a few days before BlockFi announced on March 11 it had raised $350m in a new, Series D funding round.

“If you borrow bitcoin when it’s $20k and suddenly it’s $50k, you have to top up your dollar collateral by a lot—assuming you are collateralising your clients’ deposits. The pain has been maximised both by the GBTC premium collapsing and the bitcoin price rising,” Boonen said.

Inside the crypto casino

The wild world of crypto derivatives