The V-shaped economic recovery we’ve seen since the coronavirus panic of last March could push US ten-year government bond yields up to 3 percent, capping the recent rise in equities and other risk assets, says CrossBorder Capital, a London-based research firm.

At the end of February, the firm’s Global Liquidity index registered 85 on a scale of 0-100, just short of a record 88.6, reached in September.

“The pace of the index’s descent from now on depends less on whether central banks add or subtract liquidity and far more on the latest pace of economic recovery,” CrossBorder says in its March 2021 report.

“Strong economies rarely have strong financial markets because liquidity gets redirected into working capital, as inventories are rebuilt and industries re-tool,” the firm says.

According to CrossBorder, the 10-year US Treasury yield could soon test 3 percent, or roughly double its prevailing level, based on its past relationship with a simple factor model.

The model incorporates key cyclical economic variables, such as commodity prices, the Australian/ US$ cross-rate and the US purchasing managers’ index. 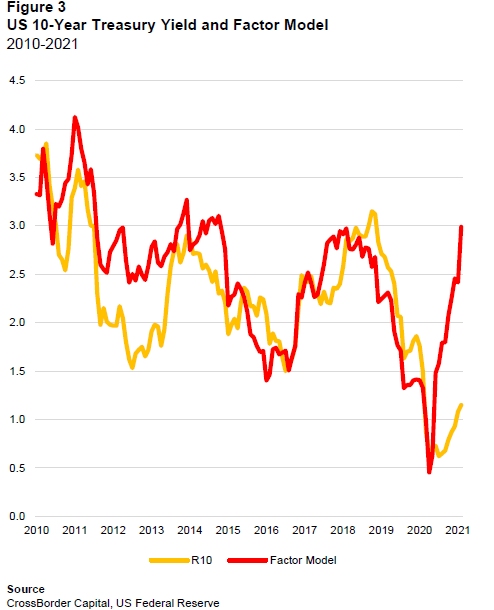 “Even a lesser test of 2-2½ percent yields could unsettle stock markets,” CrossBorder says.

According to CrossBorder, it’s the possibility of rising real yields that should be of the greatest concern to stock market bulls.

The firm points out that almost all of the rise in global bond yields since their mid-2020 lows has come from an increase in inflation expectations, rather than increases in real interest rates.

However, the firm says, it may be time to pay closer attention to changes in real yields, which could be driven by increased bond market volatility.

US Treasury market volatility has picked up since the beginning of 2021, with yields rising sharply after a poor auction of seven-year bonds in late February.

“Real yields tend to be influenced by a slower-moving component that reflects trend economic growth, plus a faster-moving factor that can be largely explained by bond term premia,” CrossBorder says.

“We know that bond term premia, in turn, are significantly affected by volatility, liquidity and net Treasury  issuance.”

“Elevated bond market volatility, and high levels of Federal Reserve liquidity and Treasury supply are associated with fatter term premia, with the lead-time on the liquidity component being around 6-9 months ahead,” CrossBorder says.

“It is the negative impact of high liquidity and rising debt issuance on real interest rates that is of greatest concern to stock markets.”

Although CrossBorder is now forecasting an equity market correction, it says it is still optimistic on the asset class on a two-year view, saying that shares are best-positioned to benefit from the huge rise in global debt levels.

“In a world of excessive debts, investing in equities (and real assets) makes a lot of sense,” CrossBorder says in its end-March report.

“Although we re-iterate our near-term concerns for markets, any shake-out is a buying opportunity. We remain bulls for the long term.”