Although cryptocurrencies can be traded around the world 24/7, there is no single market for the price of any token. And sometimes the divergences between the price for a cryptocurrency in one location and the price in another can be huge.

Famously, bitcoin saw a ‘Kimchi premium’ in December 2017, when the dollar price of bitcoin on South Korean exchanges exceeded the price in the rest of the world by more than 50 percent.

Yesterday saw another huge divergence, this time in the price of the second most widely traded cryptocurrency, ethereum.

US-based Coinbase and Kraken are two of the world’s largest cryptocurrency exchanges, ranked 1 and 4, respectively, in data provider Cryptocompare’s global exchange rankings, both with the highest rating, AA.

Coinbase was reportedly valued at $100bn a few days ago in advance of a planned public listing of its shares later this year. If accurate, this would give the crypto exchange the highest valuation of any US tech company listing on the share market since Facebook.

But while both Coinbase and Kraken recorded a new all-time high for ethereum on 20 February—$2041.42 on Coinbase and $2038.84 on Kraken—48 hours later the picture could not have been more different.

In hectic trading on 22 February, ethereum’s price declined by more than 25 percent to a low of $1507.34 on Coinbase. But on Kraken, ethereum plunged by a massive 66 percent, hitting an intraday low of $700.

Both exchanges then saw a temporary rebound, before ethereum prices fell to below $1500 in morning trading, London time, on 23 February. 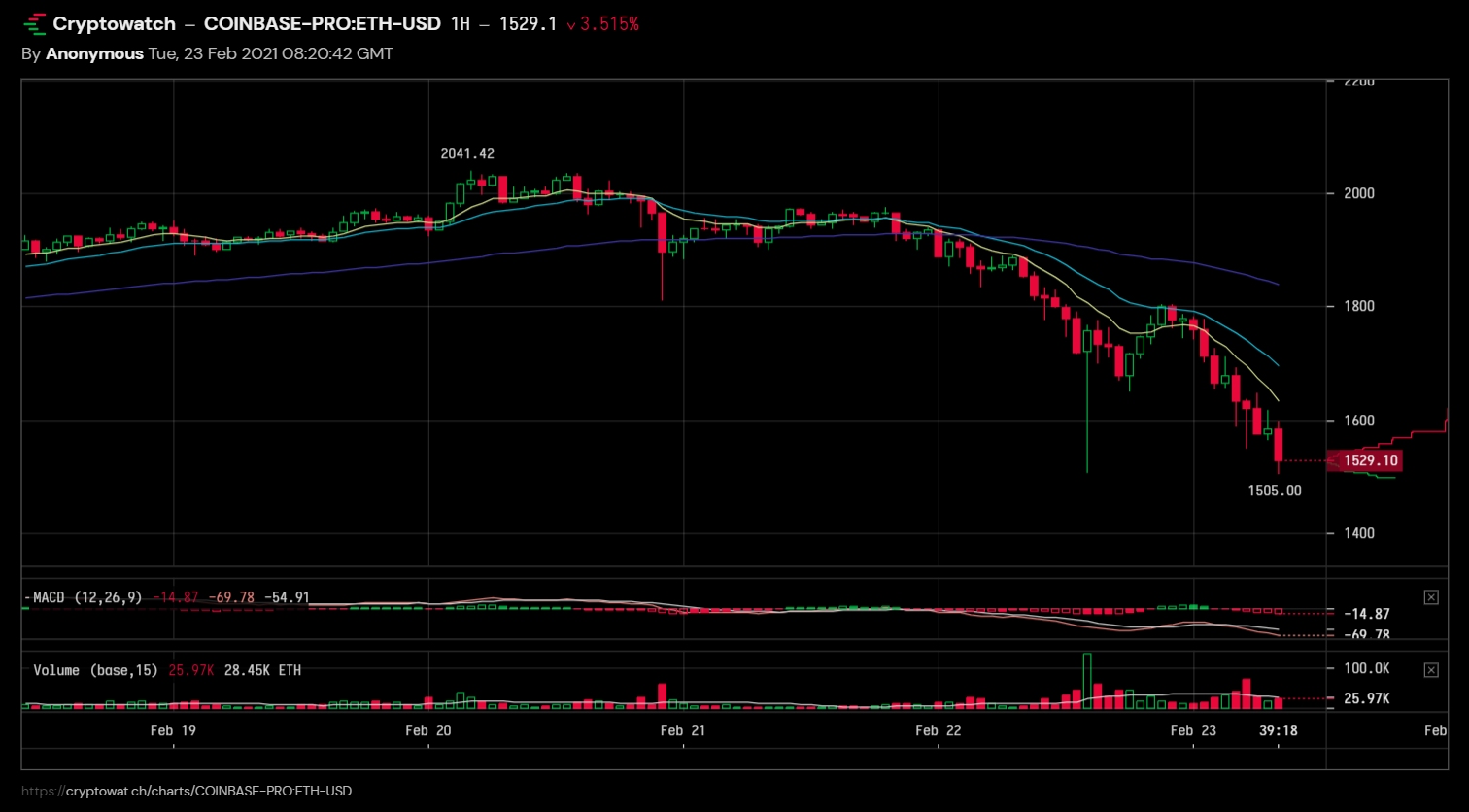 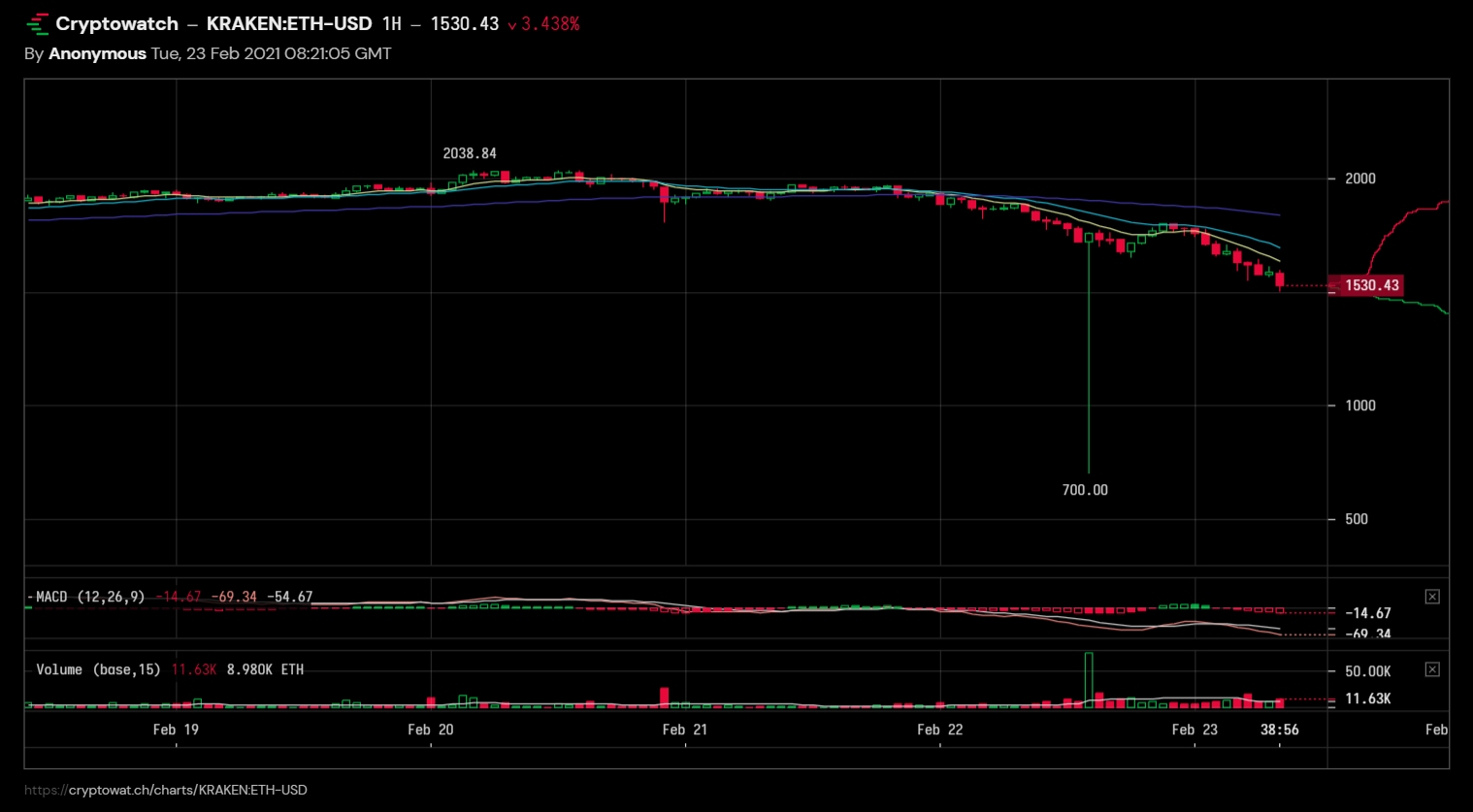 In a twitter conversation a few hours ago with disaffected clients, Kraken CEO Jesse Powell defended his exchange’s pricing of ethereum on 22 February and said it was an inevitable part of trading cryptocurrency.

“People might not like the outcome but it’s happened before and it will happen again. What would be the solution other than a monopoly exchange?”

“I think the takeaway is that Kraken performed to expectations in a massive market move and you can count on your trades being final. What’s the preferred alternative? That the platform malfunctions and we roll everything back when some people are unhappy with their trades?” Powell went on.

“Please don’t trade on margin if you don’t understand how the market works,” Powell told a client whose positions had been liquidated yesterday during the price collapse.

Kraken offers its clients leverage of up to 500 percent on spot cryptocurrency trades.

Some other cryptocurrency exchanges offer much higher leverage: Binance, for example, offers clients the ability to gamble more than 100 times their initial layout on the ethereum/dollar price.

Binance’s leveraged contract is based on a perpetual swap rather than a spot ether/dollar transaction.

Binance has halted withdrawals of ether and ethereum-based tokens at least twice in the last week.

The ethereum network has recently seen record congestion, with prices for a single transaction regularly exceeding $100.

Yesterday’s dislocations may come as an embarrassment to US futures exchange CME, which announced the launch of its ether futures contract only two weeks ago, saying that its new contracts would help traders access a single global market for the second-largest cryptocurrency.

“Ether is based on formidable blockchain technology and the CME CF Ether-Dollar rates will provide a standardised reference rate and spot price index to bring confidence to any trading strategy,” CME said on its website.

According to Sui Chung, CEO at CF benchmarks, which is the index provider for the ether-dollar reference rate and ether-dollar real-time index, both of which underlie the CME contract’s pricing, the real-time index excluded Kraken during yesterday’s market sell-off. CF Benchmarks is owned by Kraken.

“I can confirm that Kraken was excluded from the ether/dollar real-time index for approximately 11 minutes from 1419 to 1430 UTC,” Chung told New Money Review.

“This was in accordance with the provisions of Section 5.3 of the methodology.”

CF Benchmarks’ ether real-time index methodology allows the firm to exclude price feeds from individual cryptocurrency exchanges if an exchange’s quote diverges from the median price from the five exchanges used to calculate the benchmark—Bitstamp, Coinbase, Gemini, itBit, and Kraken—by more than a certain amount.

According to Chung, there was no need to exclude Kraken’s price input from the ether/dollar reference rate, which is calculated daily, using the equally weighted average of the volume-weighted medians of one-hour partitions during each 24-hour period.