Around the world, payments are becoming faster, more efficient and more convenient due to the increasing adoption of digital and mobile technology, says the Bank for International Settlements (BIS) in a new commentary.

The commentary draws upon data collected by the Committee on Payments and Market Infrastructures’ (CPMI).

The CPMI, which is hosted by the BIS, is the main regulatory and policymaking body for the world’s payment, clearing and financial settlement systems.

According to the BIS, the number of fast, online and contactless payments in CPMI countries is accelerating, as fast payment systems are rolled out in more and more jurisdictions and consumers become increasingly comfortable with digital payment methods. 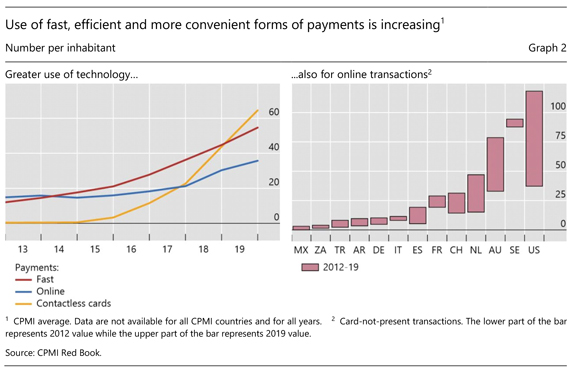 However, while the overall use of cash in payments may be declining, the picture is uneven and varies significantly from one country to another, the BIS reports.

In more than half of the CPMI jurisdictions, cash is still king and its circulation continues to grow, the BIS says. For example, in Japan and Hong Kong, cash outstanding represents 21 percent and 18 percent of GDP, respectively, a substantial increase since 2012.

Switzerland also stands out as a country where cash demand is high and rising.

Japan and Switzerland have pursued negative official interest rate policies for years, incentivising savers to hold banknotes rather than cash in bank accounts, where they face a steady erosion of their capital.

However, in other countries, banknotes are close to being eliminated. In Sweden, where a shift to digital payments occurred early, the cash-to-GDP ratio is now only 1 percent, the BIS says.

There is also an advanced/emerging economy divide when it comes to cash usage, the BIS points out.

For advanced economies, the use of cash and cheque payments declined about 30 percent between 2012 and 2019. But for emerging market economies the share of such physical payment means continued to grow over the same period. 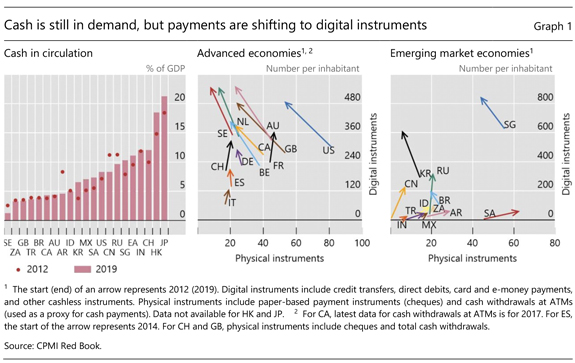 But the overall trend is towards a greater adoption of digital payment means.

Although the BIS will not publish its data on 2020 payment trends until next year, the coronavirus pandemic is likely to have accelerated the trend towards digitalisation, the BIS says.

Social distancing, public concerns about the viral transmission from cash and the surge in e-commerce activity are all accelerating the use of digital payments, the BIS notes in its commentary.