Bitcoin mining is one of the riskiest industries in the world. Now a new financial product aims to make the activity a little less dangerous. 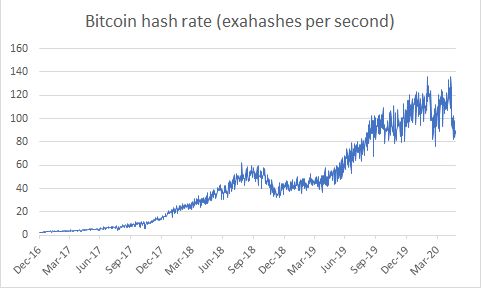 The hash rate has fallen by 36 percent in the last two weeks, reflecting an exodus of less efficient miners following the cut in bitcoin’s ‘block reward’ to half its previous level on May 12.

Around the world, entrepreneurs are seeking to convert stranded energy resources, including in the form of hydrocarbons, to money in the form of bitcoin.

Bitcoin’s hash rate cannot be measured directly: instead, it is calculated using the network’s difficulty adjustment, a pre-programmed change to the hashing algorithm that is designed to keep the production of bitcoin blocks—files of transactions—occurring every ten minutes on average.

FTX’s hashrate future, which expires quarterly, calculates its settlement price by averaging the mathematical difficulty for each block mined during the quarter.

In common with other unregulated cryptocurrency derivatives exchanges, FTX operates without central clearing. Its traders rely on an automatic, exchange-operated liquidation engine to close positions when margin levels fall below the required maintenance margin level.

An insurance fund, to which all traders contribute, then acts as a second layer of defence against ‘gap risk’—the risk of a shortfall if traders’ margin is exhausted before a liquidation can occur.

In the past, insurance funds at some crypto derivatives exchanges have been fully depleted on occasions, leading exchanges to apply mandatory ‘haircuts’ to winning traders’ positions.

In an interview with Crypto Briefing, Bankman-Fried said the exchange’s client base is primarily in East Asia. US-based clients are banned from trading on the exchange, he added.

Sino Global recently became an equity investor in FTX in a funding round that reportedly valued the crypto exchange at over $1bn.