The UK’s central bank has called for public input regarding the design of a new national digital currency amidst what it calls a revolution in payments.

In a discussion paper published on March 12, the Bank of England asked for public and private sector stakeholders to share views on the design and uses of a central bank digital currency (CBDC), which would be a new form of money and a new way of making payments.

While the Bank made clear it has not yet decided whether or not to issue a CBDC, it is weighing up the pros and cons, said the outgoing governor, Mark Carney.

In common with many other central banks, the Bank of England recognises the trend towards the disappearance of cash as a means of payment, said the governor.

Countries like Sweden and Norway are further along in this trend, said the Bank, with half of Swedish retailers expected to stop accepting cash payments by 2025. 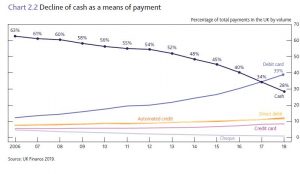 “A CBDC could ensure that the public has continued access to a risk‑free form of money issued by the central bank, which may be especially important in the future as cash use declines and new forms of privately issued money become more widely used in payments,” Carney said.

But Carney added that issuing a CBDC would mean a fundamental rethink of almost all the Bank’s activities.

“While CBDC poses a number of opportunities, it could raise significant challenges for maintaining monetary and financial stability. CBDC therefore has relevance to almost everything the Bank does, and would need to be very carefully designed if it were to be introduced,” Carney said.

The Bank warned that widespread adoption of a CBDC by the general public could undermine commercial banks, forcing the central bank to maintain a form of life support for these privately owned entities.

“If CBDC were introduced, some of the households and businesses that currently hold commercial bank deposits might wish to exchange these deposits for CBDC. Absent any other action, commercial banks…end up with a smaller balance sheet. This is known as ‘disintermediation’,” the Bank said.

“If disintermediation were to occur on a large scale, that would either imply a large fall in lending or would require banks to seek to borrow significantly more from the Bank of England. This could have profound implications for the structure of the banking system and the Bank’s balance sheet,” the central bank wrote in its discussion paper.

Concerns about a potential weakening of the banking sector have been cited as a reason for the slow introduction of CBDC around the world.

“If central bank-issued cryptocurrencies started circulating alongside private currencies, in an economic downturn you could have the most massive run on the issuers of the private currencies. This is one of the reasons CBDC are a terrifyingly bad idea,” he said.

If the UK is to have a CBDC, the Bank of England says it will likely require private sector help to operate.

The CBDC would probably consist of a core ledger, provided by the Bank, which would record CBDC and process payments, the central bank says.

Then, a group of private sector ‘Payment Interface Providers’ would handle the interaction with end‑users of CBDC and provide additional payments functionality through overlay services.

A CBDC could enable innovative uses of money, the Bank says.

These might include micropayments, which would support the development of Internet‑of‑Things (IoT) applications, which connect networks of physical devices, like smartphones, vehicles, homes and home appliances.

Micropayments could also support alternative revenue models for digital media, for example, shifting away from current subscription and ad‑based revenue models, says the Bank in its discussion paper.

And CBDC might facilitate ‘programmable money’, where payments occur according to specified conditions, rules or events.

If different national CBDCs followed similar design principles, they could be swapped with each other with minimal settlement risk, the Bank says.

This could help to reduce the cost of cross-border money flows, an area where the existing financial system is struggling to make progress.

In 2011 G20 governments made a commitment to reduce the cost of remittances to 5 percent or less by 2014. However, they have failed to achieve this target and cross-border transfers continue to consume up to 9 percent of the amount sent.