Last year’s PlusToken scam involved a clever combination of technology, fraudulent promises and viral marketing. The theft deprived its 3 million victims, mostly based in Asia, of over $2bn.

But did the scam also reveal a worrying lack of liquidity in the bitcoin market?

According to Chainalysis, which conducted an extensive analysis of PlusToken in its 2020 Crypto Crime report, when the scammers started to cash in their ill-gotten gains they may well have caused a big downdraft in bitcoin’s dollar price.

First, they sent the stolen bitcoin to a number of over-the-counter (OTC) brokers trading on the Huobi cryptocurrency exchange, with these transfers visible ‘on-chain’ (on the bitcoin blockchain).

Second, says Chainalysis, the scammers asked their OTC brokers to exchange their bitcoin for tether on Huobi, with these transfers visible only on the exchange’s internal order books.

Tether is a stablecoin, widely used across cryptocurrency markets by those who prefer to park earnings in a blockchain-based dollar token rather than trying to exchange them for fiat dollars held in a bank account.

In its report, Chainalysis said it expected the PlusToken scammers to have depressed the price of bitcoin.

“We expect that any uptick in on-chain volume would be followed by an uptick in trade volume, as OTC traders receive bitcoin from PlusToken wallets and subsequently exchange it for tether,” Chainalysis said

“And we expect bitcoin’s price to fall soon after those upticks in on-chain and trade volume, as more bitcoin is being unloaded onto the market,” the firm said.

But how much selling of bitcoin would it have taken to send the cryptocurrency’s price down?

Chainalysis suggests that a $34m cashout by the PlusToken scammers on September 20th last year may have been sufficient to trigger a big bitcoin price fall.

“On September 20th, PlusToken scammers made a large cashout of roughly $34 million worth of bitcoin,” Chainalysis said.

PlusToken cashouts (blue) and the price of bitcoin (yellow) 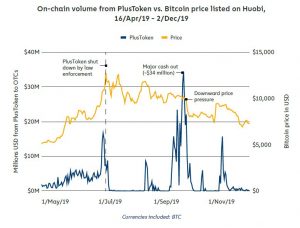 “Following that transfer, Bitcoin’s price drops steadily between September 24th and 26th, falling from just over $10,000 to about $8,000 and remaining there for roughly a month.”

In its report, Chainalysis admits it cannot prove a causal link between these two events.

However, it argues, it can show that the PlusToken cashouts caused increased volatility in bitcoin’s price, and that those cashouts also correlated significantly with bitcoin price drops.

According to some cryptocurrency sceptics, such sharp market moves for relatively small trade volumes are a characteristic of the bitcoin market.

“The reason the price of bitcoin goes wildly up and down is because the markets are thinly traded, making them easy to manipulate,” Amy Castor, senior editor for Modern Consensus, wrote last week.

Castor was referring to recent press reports that the spread of coronavirus had been responsible for sending the bitcoin price up.

“It’s possible to trade in up to €1.5bn and up to £1bn against the dollar without moving the market”

If a $34m trade were indeed responsible for causing a sharp move in the bitcoin price, it would show the market as much less liquid than well-established foreign exchange markets, where billion-dollar trades are routine

“Depending on market timing and the speed of execution I would say it’s possible to trade in up to €1.5bn and up to £1bn against the dollar without moving the market,” a specialist FX consultant, who requested anonymity, told New Money Review.

But according to cryptocurrency market participants there are reasons to be sceptical of Chainalysis’s claims, since there were other widely cited reasons for the downdraft in bitcoin’s price in September.

“That same weekend (September 21/22) the Bakkt futures exchange launched poorly,” said one trader, who requested anonymity, “and on September 23 litecoin (LTC) dropped over 10 percent. Were these events connected with PlusToken? If so, it makes sense [to argue PlusToken depressed bitcoin’s price], if not it’s hard to say there was a single cause.”

Press reports of the time mention both Bakkt’s launch and litecoin’s flash crash in the context of falling cryptocurrency prices without any reference to PlusToken.

Max Boonen, chief executive of B2C2, a cryptocurrency OTC trading firm, was also sceptical of the claims by Chainalysis.

“Every trade has a price impact, but the price impact of a $34m trade would be nowhere near $2,000 [in the dollar price of bitcoin], particularly if executed in tranches,” Boonen told New Money Review.

“As a comparison, much larger liquidations have occurred on platforms such as BitMEX with more limited price impact,” he said.

However, trades in perpetual swaps settle in cryptocurrency, rather than fiat currency.

The concentration of bitcoin trading activity on derivatives exchanges means that those trading venues provide more headline liquidity than the ‘spot’ foreign exchange market, where bitcoin is exchanged for fiat currencies like the US dollar, said one trader.

“At the moment the bid/ask spread on a $10m order on BitMEX is 0.26 percent,” the trader said. “So you can put on a pretty large position without even moving the market in a real way.”

“But if you show up and try to hit a spot exchange with a few million in a single order you’ll definitely move the market significantly.”

A further complexity in the bitcoin market is the disconnect between peer-to-peer (P2P) trading and exchange trading, said B2C2’s Boonen.

“The P2P brokers operating in connection with Asian exchanges are fairly disconnected from the rest of the market,” he said.

“Those brokers operate in an informal, grey area. It’s a little bit like hawala in India,” Boonen said.

Other factors, such as differences in regulation and local limitations on conversion to and from fiat currency also play a role in contributing to uneven price quotations for bitcoin in the global market.

Famously, bitcoin traded in South Korea in January 2018 at a 50 percent premium to quotes in the rest of the world. Recently, South Korean bitcoin prices have traded at a 3 percent discount to world values.

All these factors suggest that defining liquidity in the leading cryptocurrency will prove challenging for some time yet.