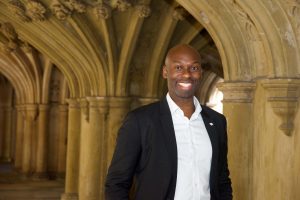 New Money Review: Cryptocurrency prices have seen a wild ride in the last three years, but last summer you told us you were preparing for the next bull market. What changes have you made?

Obi Nwosu: Last year we automated a lot of our processes, reduced costs where it made sense and invested in other areas. We’ve also looked at strategic external partnerships, which give us flexibility when things pick up. The idea is to keep core responsibilities in-house, where we have a great team, but also to be able to handle growth when it happens.

We’ve now been through two bull-bear market cycles since we started Coinfloor, and I wanted to restructure the company so that we remain agile and focused.

New Money Review: Last year Coinfloor also made a big call—to go bitcoin-only and stop trading in other cryptocurrencies. What prompted that?

Obi Nwosu: Bitcoin still represents the vast majority of trading in cryptocurrencies and it’s the asset in which most exchanges and treasuries store their own value, even if they list hundreds of other tokens. We want to offer to our customers what we would invest in ourselves.

We don’t have a problem listing other cryptocurrencies, and we have done in the past. But we have four high-level criteria to determine whether we do so.

One is whether the cryptocurrency is value-driven: in other words, do the inventors or users believe its value is important. Another is the strength of the community. Third is regulatory clarity. And finally, there’s technical maturity.

On the latter point, ethereum falls down, because in the middle of last year ethereum developers said they were going to introduce a completely new blockchain, ‘ethereum 2’, and then ask people to transition to it over a period lasting from six months to three years. If they say that, I can’t in all conscience list a coin which the inventors say is currently not good enough.

Right now, only bitcoin meets the four criteria we have set out.

New Money Review: When we interviewed you in early 2018, you mentioned the difficulty some cryptocurrency business had had in obtaining banking relationships. Have things changed?

Obi Nwosu: Yes, it’s like comparing night and day. First, we’ve now been around for longer and can demonstrate a track record, so people know us. The arrival of challenger banks, where we’d represent a more significant share of their revenues, has also helped. And we’re seeing more positive noises and greater clarity about the regulation of cryptocurrency.

On the 10th January this year, cryptocurrency exchanges and custodial wallets in the UK fell within the regulatory scope of the Financial Conduct Authority for the first time, which should help with obtaining banking.

New Money Review: Over the last two years, you’ve seen new competition from other exchanges entering the bitcoin to sterling market. How is that affecting you?

Obi Nwosu: For cryptocurrency traders, competition is good, and it also throws up more opportunities to arbitrage between exchanges. So I’d expect the arrival of new trading venues to lead to a rise in overall trading volumes.

But there are a couple of differences between us and our competitors.

First, we are focused purely on bitcoin, as I’ve mentioned. This gives us an advantage with clients who are bitcoin maximalists: if they are mentioning an exchange to their friends, they might prefer one that doesn’t distract them with other tokens.

Second, we are still the only exchange in the world with an uninterrupted process of providing proof of custody of client coins. Each month, we give an attestation of client coins, by means of an encrypted report of all current client balances. We create a bitcoin transaction to ourselves, visible on the blockchain, that includes all those client bitcoins.

New Money Review: Why don’t more exchanges do the same?

Obi Nwosu: I can understand why other people might not be comfortable releasing such detailed information: you’re showing your total client balances. You might want the world to believe your trading volumes are bigger than they actually are.

But I’d argue it works the other way. For example, in the case of exchanges that have suffered hacks or become insolvent for other reasons, like Mt. Gox or Quadriga CX, provable solvency reports would have identified problems much earlier and the ultimate damage would have been far less.

New Money Review: Given your focus on bitcoin, what areas of product development are you looking at?

Obi Nwosu: We are looking at a number of bitcoin-specific features that could improve users’ overall experience. Lightning, the potential future payments network being built on bitcoin, is one area of focus. Liquid, a sidechain-based settlement network, is another. And Bech32 bitcoin addresses, which are potentially safer, are a third area we’re researching.

We’re also looking actively at working with partners in the area of custody, where there are now a lot of excellent specialist services available.

New Money Review: We’re within a few months of the next halving of the bitcoin block reward. Last year the BIS released a paper in which it argued that bitcoin would not be able to live on fees alone, once the block reward disappears sometime next century. What do you think?

Obi Nwosu: I think bitcoin’s main long-term proposition is as a digital store of value. It has a powerful appeal for millennials and Generation X-ers, who have few other options. For them, gold is complex and old-school, property is overvalued and unobtainable, and stocks are massively overvalued too.

Let’s imagine bitcoin transaction fees in future are £50, £100 or £200. But that’s still peanuts compared to the cost of buying or selling a house: possibly tens of thousands of pounds, plus it takes months.

And bitcoin can be stored on your phone, it can be transferred instantly and you can do it anywhere in the world. Compared to other potential stores of value, it’s already massively disruptive.

Bitcoin therefore has the potential to become the new high-powered money of the future, used for settlement between countries, companies and financial institutions. That could account for trillions in value. If that’s the use case, I don’t think it matters if transaction fees are much higher than now. And so I think those fees will be able to support the network in future.