Along with healthcare, transport and energy, finance is one of the most heavily regulated sectors of the economy. The 2008 crisis showed that if things go wrong in finance they can quickly go wrong for everyone.

By contrast, the technology sector has long enjoyed minimal government interference, low levels of taxation and even preferential treatment.

In the US, social media giants have benefited since the 1990s from a so-called ‘publisher’s exemption’—broad immunity from lawsuits over the content users publish on their platforms.

That position is now being challenged, but for the time being tech firms are in the clear. And when finance and technology come together, as is increasingly the case, policymakers are left with a major headache—how to find rules for the resulting ‘fintech’ mix.

The problem is becoming more acute. According to the Financial Stability Board (FSB), an international body that monitors the global financial system, the number of services offered by large technology firms is accelerating.

In fact, BigTechs are making a full-frontal assault on finance, says the FSB in a new report. They are not just focusing on obvious areas of inefficiency, such as making payments easier, faster and cheaper.

But they are diversifying into areas that were long the mainstay of banks as well, it says. The ten large BigTech firms it monitors now offer around 50 financial services, including loans, insurance and wealth management. 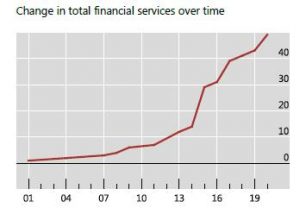 BigTech firms are expanding their financial activities particularly fast in emerging markets, says the regulatory body. Here, there may be little legacy financial infrastructure to overcome. As a result, tech firms can quickly corner the market.

But financial regulators are now speaking out on the risks of tech giants developing a monopoly.

“The entry of BigTechs into the provision of payment services raises serious market power and data privacy issues,” Agustín Carstens, general manager at the Bank for International Settlements (BIS), said in a lecture at Princeton University last week.

Carstens referred to a ‘data-network-activity feedback loop’ that is helping tech firms beat off competition.

“An essential by-product is the large stock of user data, which serves as an input for services that exploit natural network effects, generating yet further user activity. Increased user activity then completes the circle, as it generates yet more data.”

There are other potential synergies on offer, the FSB said in its report on BigTechs. Some derive from tech firms’ traditional strengths in e-commerce, social media and search.

“BigTech firms with large social media or internet search businesses could use information gathered from users’ social media presence or search history to market, distribute and (more precisely) price financial services to these users,” it said.

Getting finer pricing on loans doesn’t seem too bad an outcome for consumers. Nor do quicker, cheaper and easier payments, which tech firms have undoubtedly helped enable.

But how can regulators set rules that work for both sets of actors: the tech firms entering finance and the much more heavily supervised incumbents?

One answer, said the BIS’s Carstens, is to ensure that tech firms should not qualify for the special privileges given to banks, such as overdrafts at the central bank or other forms of special liquidity assistance.

In its new report, the FSB comes up with three other recommendations.

First, it says, regulators may need to apply rules developed for the financial sector to the tech firms themselves.

For BigTechs, this would mean a greatly enhanced level of scrutiny compared to today’s light touch treatment. Tech firms may also find themselves regulated both as individual entities and according to their financial activities, the FSB warns.

Second, says the FSB, financial sector regulators and supervisors should monitor the linkages between BigTech and finance, looking not just at systemic risk but also the potential for BigTech firms to eat into the banks’ profits. This is because weaker banks could undermine financial stability, the FSB argues.

Third, says the FSB, regulators should address the potential imbalance between tech firms and banks when it comes to access to data.

“Authorities could consider the potential to promote the mobility of data between the various actors that are involved in the provision of financial services. Doing so may help encourage competition and help ensure a level playing field amongst market participants,” the FSB says.

For the tech giants, who have benefited hugely from harvesting client data with minimal outside interference, this may be the toughest pill of all to swallow.