For its promoters, it overcomes unfair restrictions on access to the world’s banking system. For critics, it’s the engine of a massive, system-wide fraud. All eyes are on tether, the unregulated digital version of the US dollar.

“I’ve had a lot of people asking me about tether the last couple of months,” Dan Davies, an expert on financial fraud, told New Money Review podcast listeners recently.

First created as a way for cryptocurrency exchanges to exchange money amongst themselves without going through the banking system, the volume of tethers in issue has risen over fourfold this year and now exceeds $20bn. 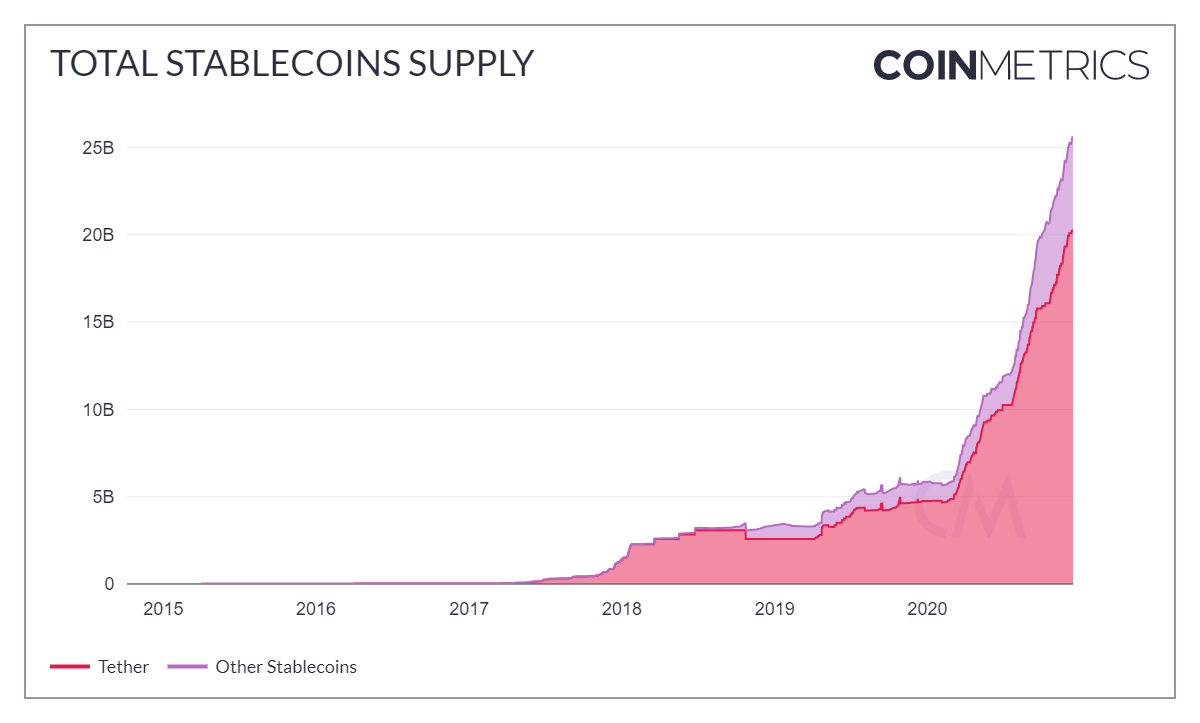 According to Tether, the legal entity issuing tethers, this reflects rising client demand.

“Tether’s growth in 2020 has been nothing short of spectacular,” Paolo Ardoino, Tether’s CTO, said last month.

“We now speak of the tetherisation of trading, with the lion’s share of spot trading volume now denominated in tether. The market has spoken: tether is preeminent. People trust tether and like using crypto’s most liquid, stable and popular stablecoin.”

“We now speak of the tetherisation of trading”

Some believe tether’s rise to prominence is part of a much bigger shift in the financial markets.

Traditionally, all US dollar trading has had to be cleared and settled in New York, but settling fiat currency transactions on the networks underlying cryptocurrencies like bitcoin—called blockchains—threatens to upend that practice.

Carter sees similarities between what he calls ‘cryptodollars’, like tether, and eurodollars, a financial innovation of the 1950s.

“By tying the settlement assurances of the blockchain with a token that represents an IOU for funds held in a bank account, you get something quite powerful,” Carter told New Money Review podcast listeners last month.

“I think we’re just at the beginning of seeing the applications of cryptodollars,” Carter said.

There’s no doubt that tether plays an important role in supporting the whole cryptocurrency ecosystem.

According to cryptoasset data firm Kaiko, the bulk of bitcoin trading now takes place using tether as the underlying unit of account, rather than US dollars..

“Since 2017, many exchanges have de-listed dollar trading pairs due to regulatory restrictions and high withdrawal fees,” said Clara Medalie, a strategist at Kaiko.

“Tether can be used anywhere and is not subject to the same level of scrutiny as transactions involving the US dollar, which is why traders have shifted their preferences, particularly in Asian markets,” said Medalie.

“Tether is one of the easiest on-ramps into cryptocurrency markets and has become more liquid to trade than the dollar,” she said.

“But this does not ignore the fact that [tether/US dollar] transactions still carry their own risk and are coming under increasing regulatory pressure,” said Medalie.

In early 2019, the New York Attorney General launched a lawsuit against Tether and its affiliate, cryptocurrency exchange Bitfinex, alleging fraud.

“Our investigation has determined that the operators of the Bitfinex trading platform, who also control the tether virtual currency, have engaged in a cover-up to hide the apparent loss of $850m of commingled client and corporate funds,” Letitia James, the Attorney General, said at the time.

In her lawsuit, James said that Tether had admitted to the authorities that its stablecoins were no more than 74 percent backed by dollars held in bank accounts, contradicting earlier assurances of full backing.

Prior to February 2019, Tether had said that its tokens were backed one-to-one by traditional currency held in reserve.

However, in March 2019, Tether changed this disclosure, stating that henceforth tether tokens would be backed by reserves which would include ‘currency and cash equivalents, including…other assets and receivables from loans made by Tether to third parties, which may include affiliated entities’.

The case continues to work its way through the US legal system, with the latest deadline—a demand by prosecutors for Tether and Bitfinex to hand over documents—set for mid-January.

But the markets operate on their own timescale.

According to critics, the reason the volumes of tether in issue have exploded this year is because the quasi-dollar is being used to prop up the bitcoin price and, by extension, the whole cryptocurrency market.

“Tether has now become impossible to shut down without ending the entire industry as we know it,” Bryce Weiner, CEO of peer-to-peer trading platform AltMarket, said at the weekend.

“The purpose of the crypto industry, and all its little service sub-industries, is to generate a narrative that will maintain and enhance the flow of actual dollars from suckers, and keep the party going,” David Gerard, a long-standing cryptocurrency sceptic, said on Sunday.

“Increasing quantities of tethers are required to make this happen. We just topped twenty billion alleged dollars’ worth of tethers, sixteen billion of those just since March 2020. If you think this is sustainable, you’re a fool.”

For those expecting the ongoing US lawsuit to settle the debate over tether, there may be disappointment ahead.

“In the past when tether’s operators said they were going to hand documents over, they simply handed over material that was already public information. They also have a long history of shenanigans, so let’s just wait and see,” Amy Castor, a cryptocurrency journalist, said yesterday.

But if tether is a ‘long firm’ fraud of the type described by Dan Davies in his book, ‘Lying for Money’, we will probably find out soon enough.

A long firm involves running up a lot of credit and then defaulting on it.

According to Davies, those running long firm frauds eventually tire of the effort involved in keeping up pretences and the schemes collapse of their own accord.

“Almost all of the fraudsters discussed in [my] book got caught,” said Davies.

“Some of them enjoyed a high lifestyle before they did. But many of them greeted their inevitable discovery with tears of joy that the whole wretched, stressful business had come to an end.”

“The time, effort and commercial acumen that goes into almost any fraud would nearly always have been better spent on doing something productive.”