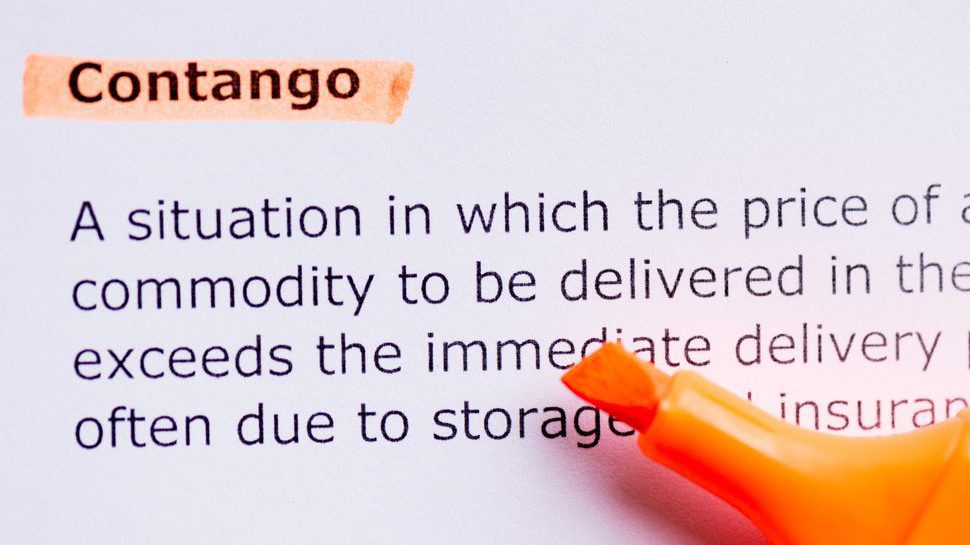 Bitcoin futures prices appear to be settling down to a small premium above the cryptocurrency’s spot price. But by how much should futures prices differ from spot?

According to financial theory, the price of a futures contract on a particular asset should move in tandem with the spot (current) price, but there will be a gap between the two.

The gap, or “basis”, reflects the collective costs faced by a futures seller, assuming that the seller wants to hedge the short position. These include the cost of buying and financing the asset, the cost of storing it until the delivery date, and any charges for insuring it.

In theory, any divergence between this theoretical basis and the levels at which futures are trading should encourage specialist traders called arbitrageurs to step in and narrow the gap.

One important element of the cost equation—the financing rate for futures—is determined by interest rate differentials. In other words, the futures seller assumes an interest cost for borrowing money to buy bitcoins, while adding back any interest received from the asset.

Since bitcoins don’t pay interest, the financing rate for a dollar-priced bitcoin futures contract should reflect the wholesale dollar interest rate over the life of the contract.

Then, if interest rates were the sole determinant of futures prices, the bitcoin futures curve should be upward-sloping, or “in contango”, in the jargon of traders.

“You’d expect the normal shape of the bitcoin futures curve to be a slight contango.”

This means that, in headline terms, the price of a bitcoin futures contract should be higher than the bitcoin spot price, and futures contracts of longer maturity should trade at steadily higher premia.

On the Chicago Mercantile Exchange (CME) and the Chicago Board Options Exchange (CBOE), both of which launched bitcoin futures in December, futures have generally traded at a premium to the prevailing market price for bitcoin, in line with what interest rates would predict.

During the first quarter of 2018, CME’s June bitcoin futures contract traded at a premium to the March contract, temporarily falling to a small discount twice during periods of a sharp decline in the cryptocurrency’s price. Overall, the premium narrowed during the three-month period. 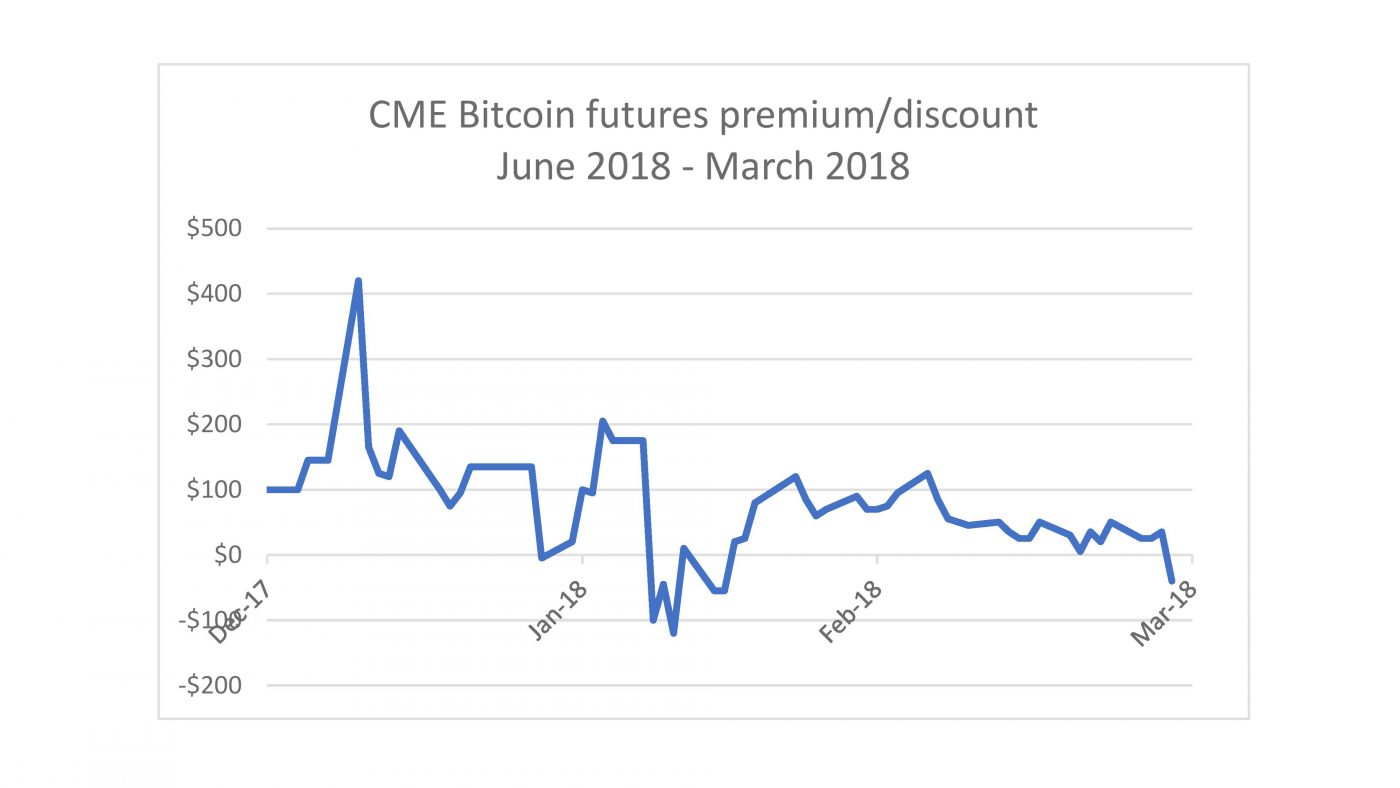 “The basis between the futures market and the spot market has tightened considerably since the launch of our contract,” said Tim McCourt, CME’s global head of equity products.

“There’s been a relatively stable term structure and a clear interrelatedness between the futures market and the spot market,” he said.

However, “it’s too early to say what the exact parameter driving the relationship between the futures price and the spot price is,” said McCourt.

In theory, in addition to interest rate differentials, traders could build the storage and insurance costs for holding bitcoin into the premium of the futures price over the spot price.

“Custodial fees for cryptocurrencies are high—anything from 0.5 to 1 percent a year.”

“Custodial fees for cryptocurrencies are high—anything from 0.5 to 1 percent a year,” Hougan told New Money Review.

Bitwise charges a 2.5 percent per annum management fee for its fund, which tracks an index of ten cryptocurrencies, weighted by their aggregate market capitalisations. The management fee includes the cost of custody.

Bitwise has contracted a separate entity, Kingdom Trust, to hold its clients’ cryptocurrencies in cold storage (cold storage means the private keys needed to authorise a transaction are kept offline to reduce the risk of theft by a computer hacker).

“We’ve only found one organisation willing to insure cryptocurrencies against hacking risk, over and above custody in cold storage, and that’s Lloyd’s of London. They charge 2-4 percent a year, which is higher than most people want to bear,” said Hougan.

“Bitcoin custody is a risky business. The risk of a hack wiping everything out is high.”

One exchange executive pointed out the inherent difficulty in arriving at a notional cost for bitcoin custody.

“It’s not costless to store bitcoin, as mechanisms need to be in place to ensure that private keys are stored securely, and that cost should be baked into the relationship between futures prices and spot prices,” Timo Schlaefer, founder of bitcoin trading platform Crypto Facilities, told New Money Review.

“It’s hard to express the cost as a percentage though, since different players have different tolerances of custody risk. Some custodians charge 10 bps per month with a fairly hefty setup fee. That could add up to 200 bps in the first year,” said Schlaefer.

Another exchange executive, who requested anonymity, suggested that measuring the cost of insuring bitcoin against theft is even trickier.

“Custody is a risky business,” the executive said.

“The risk of a single hack wiping everything out is high and you can’t properly insure against it in the current market. An insurance company will add lots of exclusions and add pages of terms and conditions as a way to wiggle out when you need it the most,” the executive said.

In one well-publicised case, insurance company Massachusetts Bay refused to pay out on a policy taken out by payments processor BitPay when BitPay suffered three separate hacks in late 2014.

Massachusetts Bay justified its decision by pointing out that the email account of one of BitPay’s business partners had been compromised. The business partner’s email address was used to send fictitious emails to BitPay, which then authorised the outwards transfer of 5,000 bitcoins (worth around $47 million at today’s prices).

“There are multiple approaches at play in pricing bitcoin futures.”

Another theoretical influence on the pricing of cryptocurrency futures is specific to this asset class. This factor, which works against the prevailing trend for a futures premium, is the possibility of a future fork of the currency.

“If market participants expected a hard fork to occur in June, for example, you’d expect the June future to trade at a pretty significant discount to the current price,” Michael Mollet, director of product development at CBOE Global Markets, told New Money Review.

Collectively, these determinants of bitcoin futures prices are still in the process of working themselves out. In the meantime, futures quotes are likely to be influenced by a variety of different players, according to CME’s Tim McCourt.

“What I would call access players in the futures market are probably more motivated by overall supply and demand than by the type of sophisticated pricing model you typically see for other financial futures contracts,” said McCourt.

“On the other hand, market makers and liquidity providers, many of which have their own spot inventories of bitcoin, are using more of a fair value approach to price bitcoin futures. There are multiple approaches at play,” he said.