More than a quarter by value of the world’s investment-grade bonds now have negative yields, according to the latest data from Bloomberg.

The market value of the Bloomberg Barclays Global Negative Yielding Debt Index rose to $17.05trn on Thursday, the highest level ever recorded. The previous record was set in August 2019. 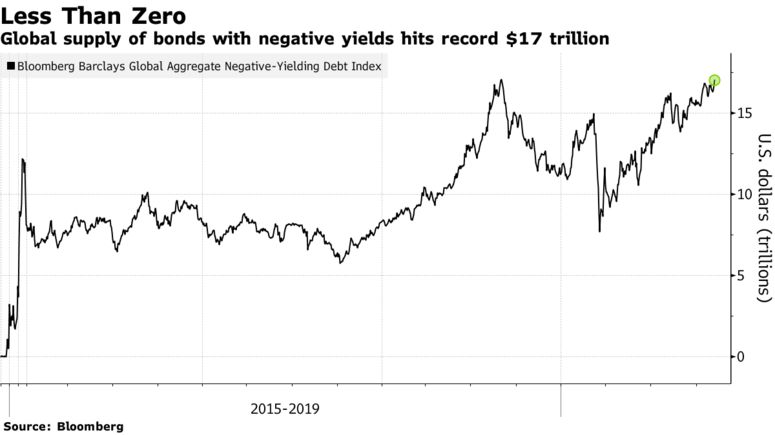 Although the coronavirus pandemic has seen a surge in government debt issuance, this has been offset by trillions of dollars of quantitative easing (QE) programmes that suppress yields.

Last week, the Bank of England and Reserve Bank of Australia announced plans to expand their QE activities.

Of the major government bond markets, only the US Treasury market still offers above-zero yields at all maturities, ranging from 0.12 percent at one year to 1.6 percent at 30 years, as at November 6.

As interest rates move downwards worldwide, savers in some countries have been hoarding large-denomination banknotes, with pronounced rises in demand for cash in Japan, Switzerland and the US.

Japan and Switzerland have pursued negative official interest rate policies for years, incentivising savers to hold banknotes rather than cash in bank accounts, where they face a steady erosion of their capital.

The global demand for US $100 bills has more than quadrupled in the last two decades, with this particular denomination reportedly highly favoured by money launderers.

Meanwhile, the issuance of dollar tokens traded and settled on cryptocurrency networks has quadrupled this year. Most of these tokens are unregulated and exchanged peer-to-peer without any need for identity checks.