The Bank for International Settlements (BIS) has issued a rallying call for countries to prevent the emergence of powerful new monopolies in the form of digital platforms run by large tech firms and focusing on payments.

The BIS, which is based in Basel, Switzerland, hosts the Committee on Payment and Market Infrastructures, the policy-making body for the world’s payment, clearing and settlement systems.

In a new report on payments, issued as part of its annual economic report, the BIS warned that the rapid digitalisation of money transfers requires a global response from policymakers.

It said that many countries’ efforts in this area are inward-looking, a fact highlighted by the recent coronavirus outbreak.

“Even though the pandemic has underscored the interdependence of countries, policy responses have been primarily national,” the BIS said.

“As authorities have limited cross-border movement and implemented social distancing measures, international economic activity has come to an abrupt halt,” it went on.

“This is particularly important given that issues of competition policy and data privacy have so far been addressed primarily at the national level and in the light of the rising tide of economic nationalism.”

In its report, the BIS highlighted the positive impact of technology firms’ growing role in payments.

In regions where banks and card companies face limited competition in payments from outsiders, said the BIS, the costs of transfers are higher, with banks and card firms enriching themselves via a range of opaque charges.

For example, it pointed out, payments cost more in countries where banks’ net interest margins—a proxy for a lack of competition—are higher. 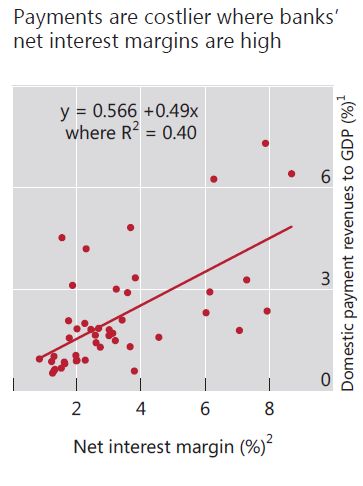 However, the BIS went on, the entrance of digital platforms into payments—a trend now unfolding worldwide—presents its own problems, even while reducing costs for users.

The tech firms running these platforms benefit from particularly strong ‘network effects’ when attracting customers, said the BIS, since the value of using a digital platform increases with the participation of each additional user.

“Network effects can be a mixed blessing,” the BIS said in its report.

“While they naturally give rise to a virtuous circle of economic gains, they can also heighten the risk of the emergence of dominant firms, which destroy competition and generate costs to society. The policy challenge is to secure the gains while avoiding the costs,” it said.

As the coronavirus pandemic has given impetus to digital payments over those made in cash, these concerns are becoming more acute, the BIS suggested.

“Platforms characterised by scalability and a broad user base can tip in favour of a dominant player or a small number of such dominant players who can achieve market power in payments very quickly,” it warned.

The BIS cited data showing an increasing volume of what it calls ‘horizontal’ merger and acquisition deals in payments—where the acquiring and target firm are direct competitors in at least one key business line.

While the BIS and its shareholders—62 central banks—do not have a formal mandate to set competition policy, the Basel institution called for new thinking on payments regulation worldwide.

“Today, the price structure of platforms does not conform to textbook models of monopoly pricing (e.g., when they offer ‘free’ services in exchange for the provision of data).”

“Likewise, even where prices for retail customers are declining, lack of competition may be slowing innovation. Thus, there is a need to reassess regulatory approaches, including by looking across platforms globally and enhancing cooperation among central banks and other authorities.”

Elsewhere in the report the BIS offered a spirited defence of central banks’ role at the core of the payments system, saying they perform three key roles in the market—as operator, catalyst and overseer.

“[Central banks] can provide the critical institutional infrastructure, set and oversee implementation of standards, and encourage the provision of a high-quality range of services, thereby promoting innovation and competition,” the BIS said.

Last year the BIS set up a new innovation hub to assist central banks during a period of accelerated technological change in money.